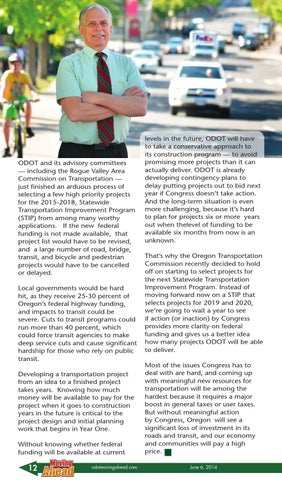 ODOT and its advisory committees — including the Rogue Valley Area Commission on Transportation — just finished an arduous process of selecting a few high priority projects for the 2015-2018, Statewide Transportation Improvement Program (STIP) from among many worthy applications. If the new federal funding is not made available, that project list would have to be revised, and a large number of road, bridge, transit, and bicycle and pedestrian projects would have to be cancelled or delayed. Local governments would be hard hit, as they receive 25-30 percent of Oregon’s federal highway funding, and impacts to transit could be severe. Cuts to transit programs could run more than 40 percent, which could force transit agencies to make deep service cuts and cause significant hardship for those who rely on public transit. Developing a transportation project from an idea to a finished project takes years. Knowing how much money will be available to pay for the project when it goes to construction years in the future is critical to the project design and initial planning work that begins in Year One. Without knowing whether federal funding will be available at current

levels in the future, ODOT will have to take a conservative approach to its construction program — to avoid promising more projects than it can actually deliver. ODOT is already developing contingency plans to delay putting projects out to bid next year if Congress doesn’t take action. And the long-term situation is even more challenging, because it’s hard to plan for projects six or more years out when thelevel of funding to be available six months from now is an unknown. That’s why the Oregon Transportation Commission recently decided to hold off on starting to select projects for the next Statewide Transportation Improvement Program. Instead of moving forward now on a STIP that selects projects for 2019 and 2020, we’re going to wait a year to see if action (or inaction) by Congress provides more clarity on federal funding and gives us a better idea how many projects ODOT will be able to deliver. Most of the issues Congress has to deal with are hard, and coming up with meaningful new resources for transportation will be among the hardest because it requires a major boost in general taxes or user taxes. But without meaningful action by Congress, Oregon will see a significant loss of investment in its roads and transit, and our economy and communities will pay a high price. June 6, 2014