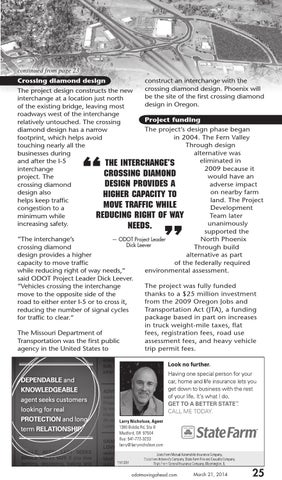 The project design constructs the new interchange at a location just north of the existing bridge, leaving most roadways west of the interchange Project funding relatively untouched. The crossing The project’s design phase began diamond design has a narrow in 2004. The Fern Valley footprint, which helps avoid Through design touching nearly all the alternative was businesses during eliminated in and after the I-5 The interchange’s 2009 because it interchange crossing diamond would have an project. The adverse impact design provides a crossing diamond on nearby farm design also higher capacity to land. The Project helps keep traffic move traffic while Development congestion to a Team later reducing right of way minimum while unanimously increasing safety. needs. supported the — ODOT Project Leader North Phoenix “The interchange’s Dick Leever Through build crossing diamond alternative as part design provides a higher of the federally required capacity to move traffic environmental assessment. while reducing right of way needs,” said ODOT Project Leader Dick Leever. The project was fully funded “Vehicles crossing the interchange thanks to a $25 million investment move to the opposite side of the from the 2009 Oregon Jobs and road to either enter I-5 or to cross it, Transportation Act (JTA), a funding reducing the number of signal cycles package based in part on increases for traffic to clear.” in truck weight-mile taxes, flat fees, registration fees, road use The Missouri Department of assessment fees, and heavy vehicle Transportation was the first public trip permit fees. agency in the United States to