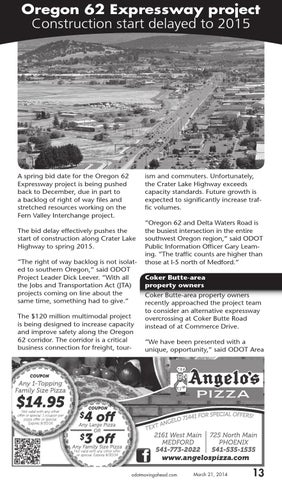 A spring bid date for the Oregon 62 Expressway project is being pushed back to December, due in part to a backlog of right of way files and stretched resources working on the Fern Valley Interchange project. The bid delay effectively pushes the start of construction along Crater Lake Highway to spring 2015. “The right of way backlog is not isolated to southern Oregon,” said ODOT Project Leader Dick Leever. “With all the Jobs and Transportation Act (JTA) projects coming on line about the same time, something had to give.” The $120 million multimodal project is being designed to increase capacity and improve safety along the Oregon 62 corridor. The corridor is a critical business connection for freight, tour-

“Oregon 62 and Delta Waters Road is the busiest intersection in the entire southwest Oregon region,” said ODOT Public Information Officer Gary Leaming. “The traffic counts are higher than those at I-5 north of Medford.” Coker Butte-area property owners Coker Butte-area property owners recently approached the project team to consider an alternative expressway overcrossing at Coker Butte Road instead of at Commerce Drive. “We have been presented with a unique, opportunity,” said ODOT Area