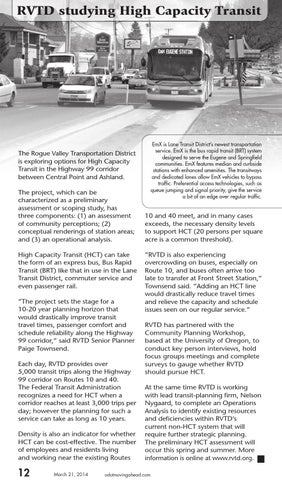 EmX is Lane Transit District’s newest transportation service. EmX is the bus rapid transit (BRT) system designed to serve the Eugene and Springfield communities. EmX features median and curbside stations with enhanced amenities. The transitways and dedicated lanes allow EmX vehicles to bypass traffic. Preferential access technologies, such as queue jumping and signal priority, give the service a bit of an edge over regular traffic.

The Rogue Valley Transportation District is exploring options for High Capacity Transit in the Highway 99 corridor between Central Point and Ashland. The project, which can be characterized as a preliminary assessment or scoping study, has three components: (1) an assessment of community perceptions; (2) conceptual renderings of station areas; and (3) an operational analysis. High Capacity Transit (HCT) can take the form of an express bus, Bus Rapid Transit (BRT) like that in use in the Lane Transit District, commuter service and even passenger rail. “The project sets the stage for a 10-20 year planning horizon that would drastically improve transit travel times, passenger comfort and schedule reliability along the Highway 99 corridor,” said RVTD Senior Planner Paige Townsend. Each day, RVTD provides over 5,000 transit trips along the Highway 99 corridor on Routes 10 and 40. The Federal Transit Administration recognizes a need for HCT when a corridor reaches at least 3,000 trips per day; however the planning for such a service can take as long as 10 years. Density is also an indicator for whether HCT can be cost-effective. The number of employees and residents living and working near the existing Routes

10 and 40 meet, and in many cases exceeds, the necessary density levels to support HCT (20 persons per square acre is a common threshold). “RVTD is also experiencing overcrowding on buses, especially on Route 10, and buses often arrive too late to transfer at Front Street Station,” Townsend said. “Adding an HCT line would drastically reduce travel times and relieve the capacity and schedule issues seen on our regular service.” RVTD has partnered with the Community Planning Workshop, based at the University of Oregon, to conduct key person interviews, hold focus groups meetings and complete surveys to gauge whether RVTD should pursue HCT. At the same time RVTD is working with lead transit-planning firm, Nelson Nygaard, to complete an Operations Analysis to identify existing resources and deficiencies within RVTD’s current non-HCT system that will require further strategic planning. The preliminary HCT assessment will occur this spring and summer. More information is online at www.rvtd.org.