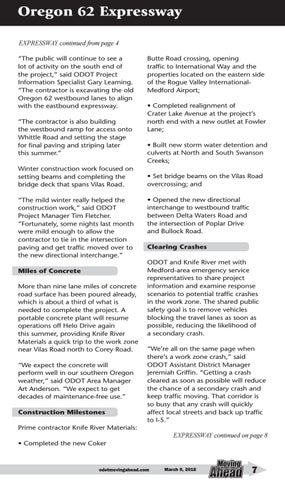 Oregon 62 Expressway EXPRESSWAY continued from page 4 “The public will continue to see a lot of activity on the south end of the project,” said ODOT Project Information Specialist Gary Leaming. “The contractor is excavating the old Oregon 62 westbound lanes to align with the eastbound expressway. “The contractor is also building the westbound ramp for access onto Whittle Road and setting the stage for final paving and striping later this summer.” Winter construction work focused on setting beams and completing the bridge deck that spans Vilas Road. “The mild winter really helped the construction work,” said ODOT Project Manager Tim Fletcher. “Fortunately, some nights last month were mild enough to allow the contractor to tie in the intersection paving and get traffic moved over to the new directional interchange.” Miles of Concrete More than nine lane miles of concrete road surface has been poured already, which is about a third of what is needed to complete the project. A portable concrete plant will resume operations off Helo Drive again this summer, providing Knife River Materials a quick trip to the work zone near Vilas Road north to Corey Road. “We expect the concrete will perform well in our southern Oregon weather,” said ODOT Area Manager Art Anderson. “We expect to get decades of maintenance-free use.” Construction Milestones

Butte Road crossing, opening traffic to International Way and the properties located on the eastern side of the Rogue Valley InternationalMedford Airport; • Completed realignment of Crater Lake Avenue at the project’s north end with a new outlet at Fowler Lane; • Built new storm water detention and culverts at North and South Swanson Creeks; • Set bridge beams on the Vilas Road overcrossing; and • Opened the new directional interchange to westbound traffic between Delta Waters Road and the intersection of Poplar Drive and Bullock Road. Clearing Crashes ODOT and Knife River met with Medford-area emergency service representatives to share project information and examine response scenarios to potential traffic crashes in the work zone. The shared public safety goal is to remove vehicles blocking the travel lanes as soon as possible, reducing the likelihood of a secondary crash. “We’re all on the same page when there’s a work zone crash,” said ODOT Assistant District Manager Jeremiah Griffin. “Getting a crash cleared as soon as possible will reduce the chance of a secondary crash and keep traffic moving. That corridor is so busy that any crash will quickly affect local streets and back up traffic to I-5.”