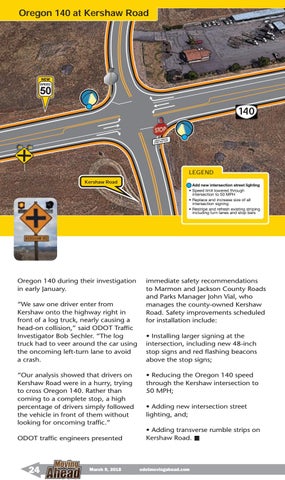 TRAFFIC CROSS T STOP DOES NO

Oregon 140 during their investigation in early January. “We saw one driver enter from Kershaw onto the highway right in front of a log truck, nearly causing a head-on collision,” said ODOT Traffic Investigator Bob Sechler. “The log truck had to veer around the car using the oncoming left-turn lane to avoid a crash. “Our analysis showed that drivers on Kershaw Road were in a hurry, trying to cross Oregon 140. Rather than coming to a complete stop, a high percentage of drivers simply followed the vehicle in front of them without looking for oncoming traffic.” ODOT traffic engineers presented