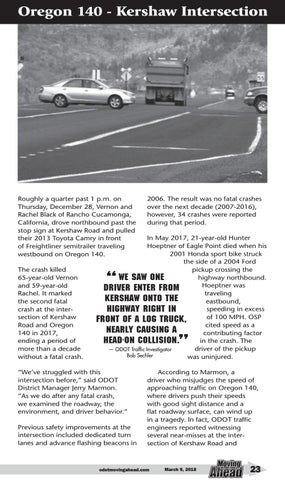 Roughly a quarter past 1 p.m. on Thursday, December 28, Vernon and Rachel Black of Rancho Cucamonga, California, drove northbound past the stop sign at Kershaw Road and pulled their 2013 Toyota Camry in front of Freightliner semitrailer traveling westbound on Oregon 140. The crash killed 65-year-old Vernon and 59-year-old Rachel. It marked the second fatal crash at the intersection of Kershaw Road and Oregon 140 in 2017, ending a period of more than a decade without a fatal crash.

In May 2017, 21-year-old Hunter Hoeptner of Eagle Point died when his 2001 Honda sport bike struck the side of a 2004 Ford pickup crossing the highway northbound. We saw one Hoeptner was driver enter from traveling Kershaw onto the eastbound, speeding in excess highway right in of 100 MPH. OSP front of a log truck, cited speed as a nearly causing a contributing factor in the crash. The head-on collision. driver of the pickup — ODOT Traffic Investigator Bob Sechler was uninjured.

“We’ve struggled with this intersection before,” said ODOT District Manager Jerry Marmon. “As we do after any fatal crash, we examined the roadway, the environment, and driver behavior.” Previous safety improvements at the intersection included dedicated turn lanes and advance flashing beacons in

According to Marmon, a driver who misjudges the speed of approaching traffic on Oregon 140, where drivers push their speeds with good sight distance and a flat roadway surface, can wind up in a tragedy. In fact, ODOT traffic engineers reported witnessing several near-misses at the intersection of Kershaw Road and