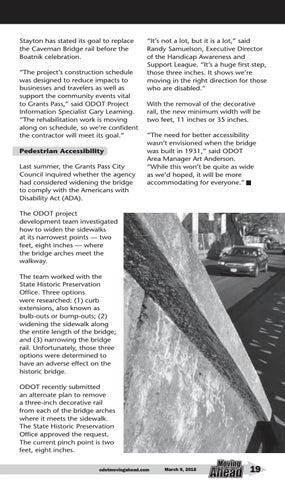 Stayton has stated its goal to replace the Caveman Bridge rail before the Boatnik celebration. “The project’s construction schedule was designed to reduce impacts to businesses and travelers as well as support the community events vital to Grants Pass,” said ODOT Project Information Specialist Gary Leaming. “The rehabilitation work is moving along on schedule, so we’re confident the contractor will meet its goal.” Pedestrian Accessibility Last summer, the Grants Pass City Council inquired whether the agency had considered widening the bridge to comply with the Americans with Disability Act (ADA).

“It’s not a lot, but it is a lot,” said Randy Samuelson, Executive Director of the Handicap Awareness and Support League. “It’s a huge first step, those three inches. It shows we’re moving in the right direction for those who are disabled.” With the removal of the decorative rail, the new minimum width will be two feet, 11 inches or 35 inches. “The need for better accessibility wasn’t envisioned when the bridge was built in 1931,” said ODOT Area Manager Art Anderson. “While this won’t be quite as wide as we’d hoped, it will be more accommodating for everyone.”

The ODOT project development team investigated how to widen the sidewalks at its narrowest points — two feet, eight inches — where the bridge arches meet the walkway. The team worked with the State Historic Preservation Office. Three options were researched: (1) curb extensions, also known as bulb-outs or bump-outs; (2) widening the sidewalk along the entire length of the bridge; and (3) narrowing the bridge rail. Unfortunately, those three options were determined to have an adverse effect on the historic bridge. ODOT recently submitted an alternate plan to remove a three-inch decorative rail from each of the bridge arches where it meets the sidewalk. The State Historic Preservation Office approved the request. The current pinch point is two feet, eight inches. odotmovingahead.com