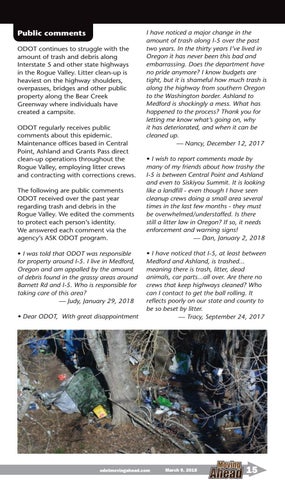 Public comments ODOT continues to struggle with the amount of trash and debris along Interstate 5 and other state highways in the Rogue Valley. Litter clean-up is heaviest on the highway shoulders, overpasses, bridges and other public property along the Bear Creek Greenway where individuals have created a campsite. ODOT regularly receives public comments about this epidemic. Maintenance offices based in Central Point, Ashland and Grants Pass direct clean-up operations throughout the Rogue Valley, employing litter crews and contracting with corrections crews. The following are public comments ODOT received over the past year regarding trash and debris in the Rogue Valley. We edited the comments to protect each person’s identity. We answered each comment via the agency’s ASK ODOT program. • I was told that ODOT was responsible for property around I-5. I live in Medford, Oregon and am appalled by the amount of debris found in the grassy areas around Barnett Rd and I-5. Who is responsible for taking care of this area? — Judy, January 29, 2018 • Dear ODOT, With great disappointment

I have noticed a major change in the amount of trash along I-5 over the past two years. In the thirty years I’ve lived in Oregon it has never been this bad and embarrassing. Does the department have no pride anymore? I know budgets are tight, but it is shameful how much trash is along the highway from southern Oregon to the Washington border. Ashland to Medford is shockingly a mess. What has happened to the process? Thank you for letting me know what’s going on, why it has deteriorated, and when it can be cleaned up. — Nancy, December 12, 2017 • I wish to report comments made by many of my friends about how trashy the I-5 is between Central Point and Ashland and even to Siskiyou Summit. It is looking like a landfill - even though I have seen cleanup crews doing a small area several times in the last few months - they must be overwhelmed/understaffed. Is there still a litter law in Oregon? If so, it needs enforcement and warning signs! — Dan, January 2, 2018 • I have noticed that I-5, at least between Medford and Ashland, is trashed... meaning there is trash, litter, dead animals, car parts...all over. Are there no crews that keep highways cleaned? Who can I contact to get the ball rolling. It reflects poorly on our state and county to be so beset by litter. — Tracy, September 24, 2017