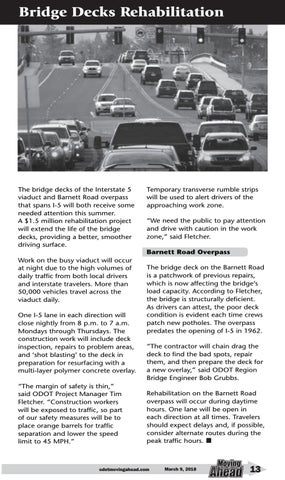 The bridge decks of the Interstate 5 viaduct and Barnett Road overpass that spans I-5 will both receive some needed attention this summer. A $1.5 million rehabilitation project will extend the life of the bridge decks, providing a better, smoother driving surface. Work on the busy viaduct will occur at night due to the high volumes of daily traffic from both local drivers and interstate travelers. More than 50,000 vehicles travel across the viaduct daily. One I-5 lane in each direction will close nightly from 8 p.m. to 7 a.m. Mondays through Thursdays. The construction work will include deck inspection, repairs to problem areas, and ‘shot blasting’ to the deck in preparation for resurfacing with a multi-layer polymer concrete overlay. “The margin of safety is thin,” said ODOT Project Manager Tim Fletcher. “Construction workers will be exposed to traffic, so part of our safety measures will be to place orange barrels for traffic separation and lower the speed limit to 45 MPH.”

Temporary transverse rumble strips will be used to alert drivers of the approaching work zone. “We need the public to pay attention and drive with caution in the work zone,” said Fletcher. Barnett Road Overpass The bridge deck on the Barnett Road is a patchwork of previous repairs, which is now affecting the bridge’s load capacity. According to Fletcher, the bridge is structurally deficient. As drivers can attest, the poor deck condition is evident each time crews patch new potholes. The overpass predates the opening of I-5 in 1962. “The contractor will chain drag the deck to find the bad spots, repair them, and then prepare the deck for a new overlay,” said ODOT Region Bridge Engineer Bob Grubbs. Rehabilitation on the Barnett Road overpass will occur during daytime hours. One lane will be open in each direction at all times. Travelers should expect delays and, if possible, consider alternate routes during the peak traffic hours.