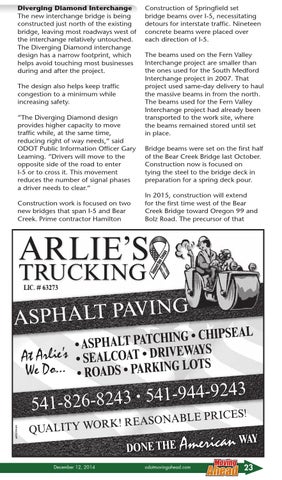 Diverging Diamond Interchange The new interchange bridge is being constructed just north of the existing bridge, leaving most roadways west of the interchange relatively untouched. The Diverging Diamond interchange design has a narrow footprint, which helps avoid touching most businesses during and after the project. The design also helps keep traffic congestion to a minimum while increasing safety. “The Diverging Diamond design provides higher capacity to move traffic while, at the same time, reducing right of way needs,” said ODOT Public Information Officer Gary Leaming. “Drivers will move to the opposite side of the road to enter I-5 or to cross it. This movement reduces the number of signal phases a driver needs to clear.” Construction work is focused on two new bridges that span I-5 and Bear Creek. Prime contractor Hamilton

Construction of Springfield set bridge beams over I-5, necessitating detours for interstate traffic. Nineteen concrete beams were placed over each direction of I-5. The beams used on the Fern Valley Interchange project are smaller than the ones used for the South Medford Interchange project in 2007. That project used same-day delivery to haul the massive beams in from the north. The beams used for the Fern Valley Interchange project had already been transported to the work site, where the beams remained stored until set in place. Bridge beams were set on the first half of the Bear Creek Bridge last October. Construction now is focused on tying the steel to the bridge deck in preparation for a spring deck pour. In 2015, construction will extend for the first time west of the Bear Creek Bridge toward Oregon 99 and Bolz Road. The precursor of that