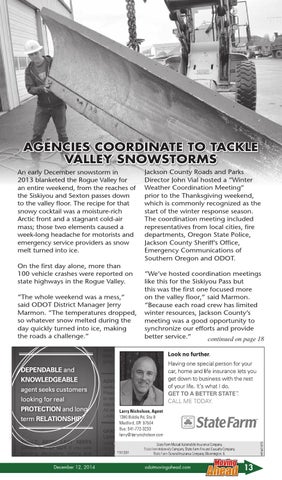 AGENCIES COORDINATE TO TACKLE VALLEY SNOWSTORMS An early December snowstorm in 2013 blanketed the Rogue Valley for an entire weekend, from the reaches of the Siskiyou and Sexton passes down to the valley floor. The recipe for that snowy cocktail was a moisture-rich Arctic front and a stagnant cold-air mass; those two elements caused a week-long headache for motorists and emergency service providers as snow melt turned into ice. On the first day alone, more than 100 vehicle crashes were reported on state highways in the Rogue Valley. “The whole weekend was a mess,” said ODOT District Manager Jerry Marmon. “The temperatures dropped, so whatever snow melted during the day quickly turned into ice, making the roads a challenge.”

Jackson County Roads and Parks Director John Vial hosted a “Winter Weather Coordination Meeting” prior to the Thanksgiving weekend, which is commonly recognized as the start of the winter response season. The coordination meeting included representatives from local cities, fire departments, Oregon State Police, Jackson County Sheriff’s Office, Emergency Communications of Southern Oregon and ODOT. “We’ve hosted coordination meetings like this for the Siskiyou Pass but this was the first one focused more on the valley floor,” said Marmon. “Because each road crew has limited winter resources, Jackson County’s meeting was a good opportunity to synchronize our efforts and provide better service.” continued on page 18