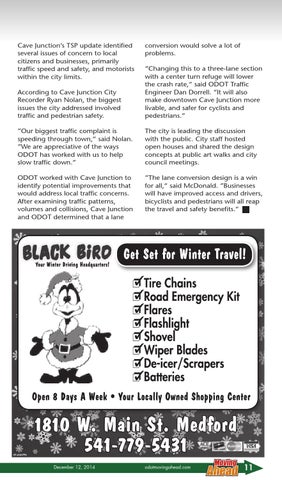 conversion would solve a lot of problems.

“Changing this to a three-lane section with a center turn refuge will lower the crash rate,” said ODOT Traffic Engineer Dan Dorrell. “It will also make downtown Cave Junction more livable, and safer for cyclists and pedestrians.”

“Our biggest traffic complaint is speeding through town,” said Nolan. “We are appreciative of the ways ODOT has worked with us to help slow traffic down.”

The city is leading the discussion with the public. City staff hosted open houses and shared the design concepts at public art walks and city council meetings.

ODOT worked with Cave Junction to identify potential improvements that would address local traffic concerns. After examining traffic patterns, volumes and collisions, Cave Junction and ODOT determined that a lane

“The lane conversion design is a win for all,” said McDonald. “Businesses will have improved access and drivers, bicyclists and pedestrians will all reap the travel and safety benefits.”