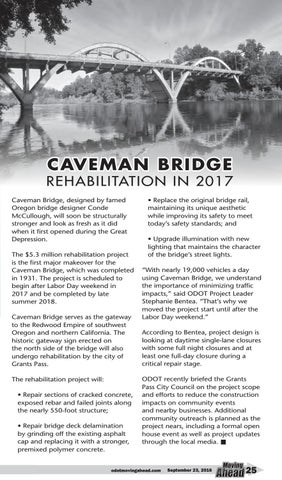 REHABILITATION IN 2017 Caveman Bridge, designed by famed Oregon bridge designer Conde McCullough, will soon be structurally stronger and look as fresh as it did when it first opened during the Great Depression. The $5.3 million rehabilitation project is the first major makeover for the Caveman Bridge, which was completed in 1931. The project is scheduled to begin after Labor Day weekend in 2017 and be completed by late summer 2018. Caveman Bridge serves as the gateway to the Redwood Empire of southwest Oregon and northern California. The historic gateway sign erected on the north side of the bridge will also undergo rehabilitation by the city of Grants Pass. The rehabilitation project will: • Repair sections of cracked concrete, exposed rebar and failed joints along the nearly 550-foot structure; • Repair bridge deck delamination by grinding off the existing asphalt cap and replacing it with a stronger, premixed polymer concrete.

• Replace the original bridge rail, maintaining its unique aesthetic while improving its safety to meet today’s safety standards; and • Upgrade illumination with new lighting that maintains the character of the bridge’s street lights. “With nearly 19,000 vehicles a day using Caveman Bridge, we understand the importance of minimizing traffic impacts,” said ODOT Project Leader Stephanie Bentea. “That’s why we moved the project start until after the Labor Day weekend.” According to Bentea, project design is looking at daytime single-lane closures with some full night closures and at least one full-day closure during a critical repair stage. ODOT recently briefed the Grants Pass City Council on the project scope and efforts to reduce the construction impacts on community events and nearby businesses. Additional community outreach is planned as the project nears, including a formal open house event as well as project updates through the local media.