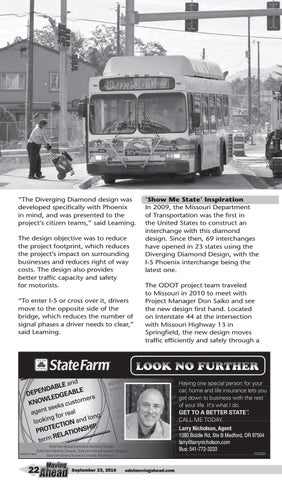 “The Diverging Diamond design was developed specifically with Phoenix in mind, and was presented to the project’s citizen teams,” said Leaming. The design objective was to reduce the project footprint, which reduces the project’s impact on surrounding businesses and reduces right of way costs. The design also provides better traffic capacity and safety for motorists. “To enter I-5 or cross over it, drivers move to the opposite side of the bridge, which reduces the number of signal phases a driver needs to clear,” said Leaming.

‘Show Me State’ Inspiration In 2009, the Missouri Department of Transportation was the first in the United States to construct an interchange with this diamond design. Since then, 69 interchanges have opened in 23 states using the Diverging Diamond Design, with the I-5 Phoenix interchange being the latest one. The ODOT project team traveled to Missouri in 2010 to meet with Project Manager Don Saiko and see the new design first hand. Located on Interstate 44 at the intersection with Missouri Highway 13 in Springfield, the new design moves traffic efficiently and safely through a