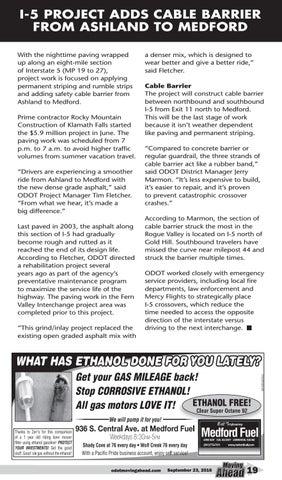 I-5 PROJECT ADDS CABLE BARRIER FROM ASHLAND TO MEDFORD With the nighttime paving wrapped up along an eight-mile section of Interstate 5 (MP 19 to 27), project work is focused on applying permanent striping and rumble strips and adding safety cable barrier from Ashland to Medford. Prime contractor Rocky Mountain Construction of Klamath Falls started the $5.9 million project in June. The paving work was scheduled from 7 p.m. to 7 a.m. to avoid higher traffic volumes from summer vacation travel. “Drivers are experiencing a smoother ride from Ashland to Medford with the new dense grade asphalt,” said ODOT Project Manager Tim Fletcher. “From what we hear, it’s made a big difference.” Last paved in 2003, the asphalt along this section of I-5 had gradually become rough and rutted as it reached the end of its design life. According to Fletcher, ODOT directed a rehabilitation project several years ago as part of the agency’s preventative maintenance program to maximize the service life of the highway. The paving work in the Fern Valley Interchange project area was completed prior to this project. “This grind/inlay project replaced the existing open graded asphalt mix with

a denser mix, which is designed to wear better and give a better ride,” said Fletcher. Cable Barrier The project will construct cable barrier between northbound and southbound I-5 from Exit 11 north to Medford. This will be the last stage of work because it isn’t weather dependent like paving and permanent striping. “Compared to concrete barrier or regular guardrail, the three strands of cable barrier act like a rubber band,” said ODOT District Manager Jerry Marmon. “It’s less expensive to build, it’s easier to repair, and it’s proven to prevent catastrophic crossover crashes.” According to Marmon, the section of cable barrier struck the most in the Rogue Valley is located on I-5 north of Gold Hill. Southbound travelers have missed the curve near milepost 44 and struck the barrier multiple times. ODOT worked closely with emergency service providers, including local fire departments, law enforcement and Mercy Flights to strategically place I-5 crossovers, which reduce the time needed to access the opposite direction of the interstate versus driving to the next interchange.