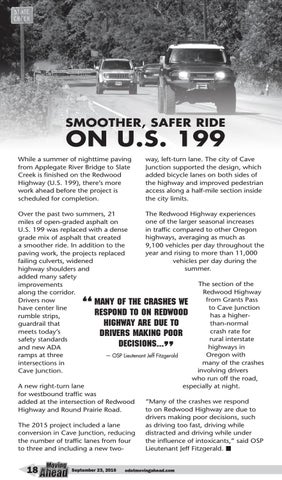 While a summer of nighttime paving from Applegate River Bridge to Slate Creek is finished on the Redwood Highway (U.S. 199), there’s more work ahead before the project is scheduled for completion.

way, left-turn lane. The city of Cave Junction supported the design, which added bicycle lanes on both sides of the highway and improved pedestrian access along a half-mile section inside the city limits.

The Redwood Highway experiences Over the past two summers, 21 one of the larger seasonal increases miles of open-graded asphalt on in traffic compared to other Oregon U.S. 199 was replaced with a dense highways, averaging as much as grade mix of asphalt that created 9,100 vehicles per day throughout the a smoother ride. In addition to the year and rising to more than 11,000 paving work, the projects replaced vehicles per day during the failing culverts, widened summer. highway shoulders and added many safety The section of the improvements Redwood Highway along the corridor. from Grants Pass Drivers now Many of the crashes we to Cave Junction have center line respond to on Redwood has a higherrumble strips, than-normal Highway are due to guardrail that crash rate for meets today’s drivers making poor rural interstate safety standards decisions... highways in and new ADA Oregon with ramps at three — OSP Lieutenant Jeff Fitzgerald many of the crashes intersections in involving drivers Cave Junction. who run off the road, especially at night. A new right-turn lane for westbound traffic was “Many of the crashes we respond added at the intersection of Redwood to on Redwood Highway are due to Highway and Round Prairie Road. drivers making poor decisions, such as driving too fast, driving while The 2015 project included a lane distracted and driving while under conversion in Cave Junction, reducing the influence of intoxicants,” said OSP the number of traffic lanes from four Lieutenant Jeff Fitzgerald. to three and including a new two-