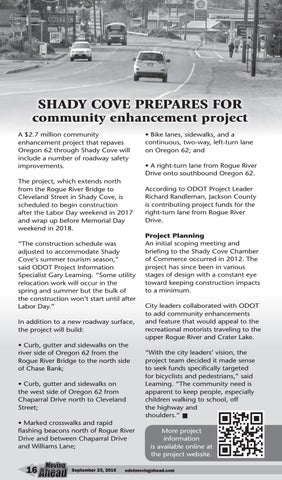 community enhancement project A $2.7 million community enhancement project that repaves Oregon 62 through Shady Cove will include a number of roadway safety improvements. The project, which extends north from the Rogue River Bridge to Cleveland Street in Shady Cove, is scheduled to begin construction after the Labor Day weekend in 2017 and wrap up before Memorial Day weekend in 2018. “The construction schedule was adjusted to accommodate Shady Cove’s summer tourism season,” said ODOT Project Information Specialist Gary Leaming. “Some utility relocation work will occur in the spring and summer but the bulk of the construction won’t start until after Labor Day.” In addition to a new roadway surface, the project will build: • Curb, gutter and sidewalks on the river side of Oregon 62 from the Rogue River Bridge to the north side of Chase Bank; • Curb, gutter and sidewalks on the west side of Oregon 62 from Chaparral Drive north to Cleveland Street; • Marked crosswalks and rapid flashing beacons north of Rogue River Drive and between Chaparral Drive and Williams Lane;

• Bike lanes, sidewalks, and a continuous, two-way, left-turn lane on Oregon 62; and • A right-turn lane from Rogue River Drive onto southbound Oregon 62. According to ODOT Project Leader Richard Randleman, Jackson County is contributing project funds for the right-turn lane from Rogue River Drive. Project Planning An initial scoping meeting and briefing to the Shady Cove Chamber of Commerce occurred in 2012. The project has since been in various stages of design with a constant eye toward keeping construction impacts to a minimum. City leaders collaborated with ODOT to add community enhancements and feature that would appeal to the recreational motorists traveling to the upper Rogue River and Crater Lake. “With the city leaders’ vision, the project team decided it made sense to seek funds specifically targeted for bicyclists and pedestrians,” said Leaming. “The community need is apparent to keep people, especially children walking to school, off the highway and shoulders.” More project information is available online at the project website.