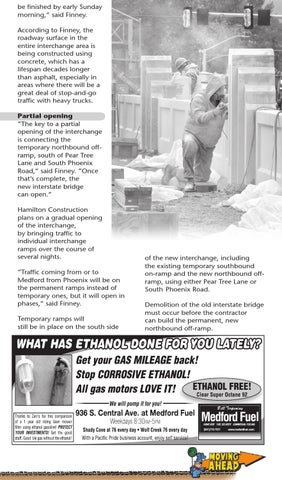 be finished by early Sunday morning,” said Finney. According to Finney, the roadway surface in the entire interchange area is being constructed using concrete, which has a lifespan decades longer than asphalt, especially in areas where there will be a great deal of stop-and-go traffic with heavy trucks. Partial opening “The key to a partial opening of the interchange is connecting the temporary northbound offramp, south of Pear Tree Lane and South Phoenix Road,” said Finney. “Once that’s complete, the new interstate bridge can open.” Hamilton Construction plans on a gradual opening of the interchange, by bringing traffic to individual interchange ramps over the course of several nights. “Traffic coming from or to Medford from Phoenix will be on the permanent ramps instead of temporary ones, but it will open in phases,” said Finney. Temporary ramps will still be in place on the south side

of the new interchange, including the existing temporary southbound on-ramp and the new northbound offramp, using either Pear Tree Lane or South Phoenix Road. Demolition of the old interstate bridge must occur before the contractor can build the permanent, new northbound off-ramp.