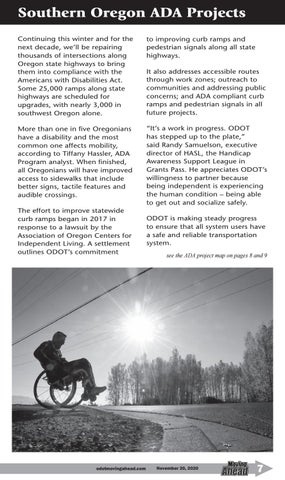 Southern Oregon ADA Projects Header Continuing this winter and for the next decade, we’ll be repairing thousands of intersections along Oregon state highways to bring them into compliance with the Americans with Disabilities Act. Some 25,000 ramps along state highways are scheduled for upgrades, with nearly 3,000 in southwest Oregon alone.

to improving curb ramps and pedestrian signals along all state highways.

More than one in five Oregonians have a disability and the most common one affects mobility, according to Tiffany Hassler, ADA Program analyst. When finished, all Oregonians will have improved access to sidewalks that include better signs, tactile features and audible crossings.

“It’s a work in progress. ODOT has stepped up to the plate,” said Randy Samuelson, executive director of HASL, the Handicap Awareness Support League in Grants Pass. He appreciates ODOT’s willingness to partner because being independent is experiencing the human condition – being able to get out and socialize safely.

The effort to improve statewide curb ramps began in 2017 in response to a lawsuit by the Association of Oregon Centers for Independent Living. A settlement outlines ODOT’s commitment

ODOT is making steady progress to ensure that all system users have a safe and reliable transportation system. see the ADA project map on pages 8 and 9