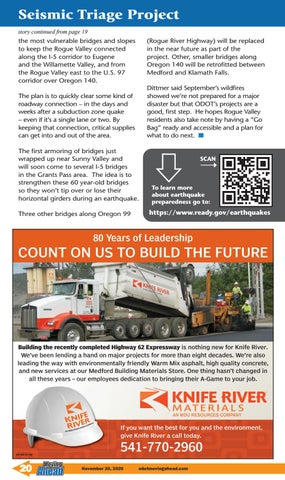 (Rogue River Highway) will be replaced in the near future as part of the project. Other, smaller bridges along Oregon 140 will be retrofitted between Medford and Klamath Falls.

Dittmer said September’s wildfires showed we’re not prepared for a major disaster but that ODOT’s projects are a good, first step. He hopes Rogue Valley residents also take note by having a “Go Bag” ready and accessible and a plan for what to do next. ■

The plan is to quickly clear some kind of roadway connection – in the days and weeks after a subduction zone quake – even if it’s a single lane or two. By keeping that connection, critical supplies can get into and out of the area. The first armoring of bridges just wrapped up near Sunny Valley and will soon come to several I-5 bridges in the Grants Pass area. The idea is to strengthen these 60 year-old bridges so they won’t tip over or lose their horizontal girders during an earthquake. Three other bridges along Oregon 99

To learn more about earthquake preparedness go to:

COUNT ON US TO BUILD THE FUTURE

Building the recently completed Highway 62 Expressway is nothing new for Knife River. We’ve been lending a hand on major projects for more than eight decades. We’re also leading the way with environmentally friendly Warm Mix asphalt, high quality concrete, and new services at our Medford Building Materials Store. One thing hasn’t changed in all these years – our employees dedication to bringing their A-Game to your job.

If you want the best for you and the environment, give Knife River a call today.