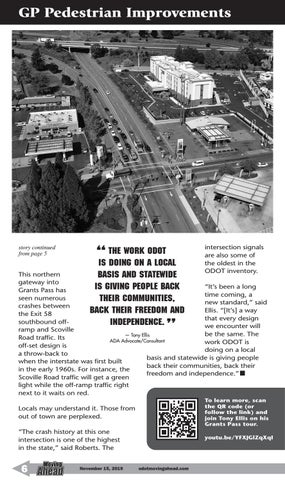 The work ODOT is doing on a local basis and statewide is giving people back their communities, back their freedom and independence.

intersection signals are also some of the oldest in the ODOT inventory.

This northern gateway into “It’s been a long Grants Pass has time coming, a seen numerous new standard,” said crashes between Ellis. “[It’s] a way the Exit 58 that every design southbound offwe encounter will ramp and Scoville be the same. The — Tony Ellis Road traffic. Its ADA Advocate/Consultant work ODOT is off-set design is doing on a local a throw-back to basis and statewide is giving people when the interstate was first built back their communities, back their in the early 1960s. For instance, the freedom and independence.” Scoville Road traffic will get a green light while the off-ramp traffic right next to it waits on red.

Locals may understand it. Those from out of town are perplexed.

To learn more, scan the QR code (or follow the link) and join Tony Ellis on his Grants Pass tour.

“The crash history at this one intersection is one of the highest in the state,” said Roberts. The