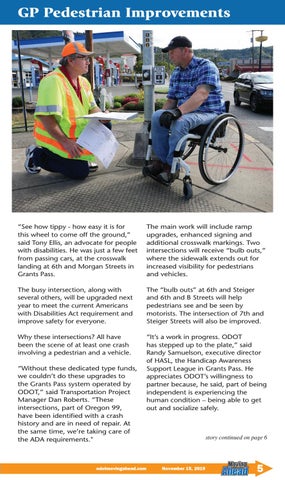 “See how tippy - how easy it is for this wheel to come off the ground,” said Tony Ellis, an advocate for people with disabilities. He was just a few feet from passing cars, at the crosswalk landing at 6th and Morgan Streets in Grants Pass.

The main work will include ramp upgrades, enhanced signing and additional crosswalk markings. Two intersections will receive “bulb outs,” where the sidewalk extends out for increased visibility for pedestrians and vehicles.

The busy intersection, along with several others, will be upgraded next year to meet the current Americans with Disabilities Act requirement and improve safety for everyone.

Why these intersections? All have been the scene of at least one crash involving a pedestrian and a vehicle.

“It’s a work in progress. ODOT has stepped up to the plate,” said Randy Samuelson, executive director of HASL, the Handicap Awareness Support League in Grants Pass. He appreciates ODOT’s willingness to partner because, he said, part of being independent is experiencing the human condition – being able to get out and socialize safely.

“Without these dedicated type funds, we couldn’t do these upgrades to the Grants Pass system operated by ODOT,” said Transportation Project Manager Dan Roberts. “These intersections, part of Oregon 99, have been identified with a crash history and are in need of repair. At the same time, we’re taking care of the ADA requirements.&quot;