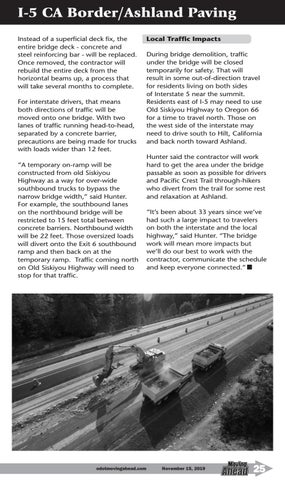 I-5 CA Border/Ashland Paving Instead of a superficial deck fix, the entire bridge deck - concrete and steel reinforcing bar - will be replaced. Once removed, the contractor will rebuild the entire deck from the horizontal beams up, a process that will take several months to complete. For interstate drivers, that means both directions of traffic will be moved onto one bridge. With two lanes of traffic running head-to-head, separated by a concrete barrier, precautions are being made for trucks with loads wider than 12 feet. “A temporary on-ramp will be constructed from old Siskiyou Highway as a way for over-wide southbound trucks to bypass the narrow bridge width,” said Hunter. For example, the southbound lanes on the northbound bridge will be restricted to 15 feet total between concrete barriers. Northbound width will be 22 feet. Those oversized loads will divert onto the Exit 6 southbound ramp and then back on at the temporary ramp. Traffic coming north on Old Siskiyou Highway will need to stop for that traffic.

Local Traffic Impacts During bridge demolition, traffic under the bridge will be closed temporarily for safety. That will result in some out-of-direction travel for residents living on both sides of Interstate 5 near the summit. Residents east of I-5 may need to use Old Siskiyou Highway to Oregon 66 for a time to travel north. Those on the west side of the interstate may need to drive south to Hilt, California and back north toward Ashland. Hunter said the contractor will work hard to get the area under the bridge passable as soon as possible for drivers and Pacific Crest Trail through-hikers who divert from the trail for some rest and relaxation at Ashland. “It’s been about 33 years since we’ve had such a large impact to travelers on both the interstate and the local highway,” said Hunter. “The bridge work will mean more impacts but we’ll do our best to work with the contractor, communicate the schedule and keep everyone connected.”