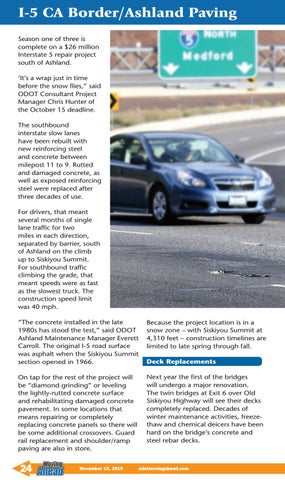 I-5 CA Border/Ashland Paving Season one of three is complete on a $26 million Interstate 5 repair project south of Ashland. ‘It’s a wrap just in time before the snow flies,” said ODOT Consultant Project Manager Chris Hunter of the October 15 deadline. The southbound interstate slow lanes have been rebuilt with new reinforcing steel and concrete between milepost 11 to 9. Rutted and damaged concrete, as well as exposed reinforcing steel were replaced after three decades of use. For drivers, that meant several months of single lane traffic for two miles in each direction, separated by barrier, south of Ashland on the climb up to Siskiyou Summit. For southbound traffic climbing the grade, that meant speeds were as fast as the slowest truck. The construction speed limit was 40 mph. “The concrete installed in the late 1980s has stood the test,” said ODOT Ashland Maintenance Manager Everett Carroll. The original I-5 road surface was asphalt when the Siskiyou Summit section opened in 1966.

Because the project location is in a snow zone – with Siskiyou Summit at 4,310 feet – construction timelines are limited to late spring through fall.

On tap for the rest of the project will be “diamond grinding” or leveling the lightly-rutted concrete surface and rehabilitating damaged concrete pavement. In some locations that means repairing or completely replacing concrete panels so there will be some additional crossovers. Guard rail replacement and shoulder/ramp paving are also in store.

Next year the first of the bridges will undergo a major renovation. The twin bridges at Exit 6 over Old Siskiyou Highway will see their decks completely replaced. Decades of winter maintenance activities, freezethaw and chemical deicers have been hard on the bridge’s concrete and steel rebar decks.