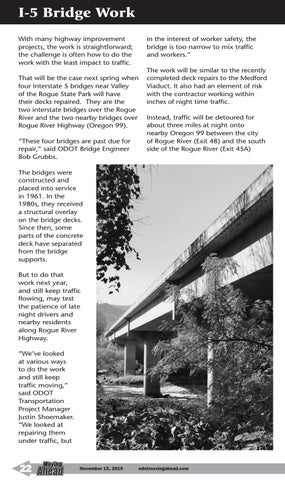 I-5 Bridge Work With many highway improvement projects, the work is straightforward; the challenge is often how to do the work with the least impact to traffic.

in the interest of worker safety, the bridge is too narrow to mix traffic and workers.”

That will be the case next spring when four Interstate 5 bridges near Valley of the Rogue State Park will have their decks repaired. They are the two interstate bridges over the Rogue River and the two nearby bridges over Rogue River Highway (Oregon 99). “These four bridges are past due for repair,” said ODOT Bridge Engineer Bob Grubbs.

The work will be similar to the recently completed deck repairs to the Medford Viaduct. It also had an element of risk with the contractor working within inches of night time traffic. Instead, traffic will be detoured for about three miles at night onto nearby Oregon 99 between the city of Rogue River (Exit 48) and the south side of the Rogue River (Exit 45A)

The bridges were constructed and placed into service in 1961. In the 1980s, they received a structural overlay on the bridge decks. Since then, some parts of the concrete deck have separated from the bridge supports. But to do that work next year, and still keep traffic flowing, may test the patience of late night drivers and nearby residents along Rogue River Highway. “We’ve looked at various ways to do the work and still keep traffic moving,” said ODOT Transportation Project Manager Justin Shoemaker. “We looked at repairing them under traffic, but