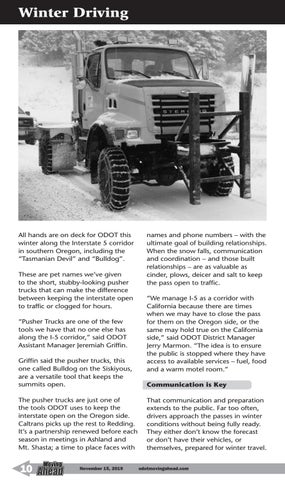 All hands are on deck for ODOT this winter along the Interstate 5 corridor in southern Oregon, including the “Tasmanian Devil” and “Bulldog”. These are pet names we’ve given to the short, stubby-looking pusher trucks that can make the difference between keeping the interstate open to traffic or clogged for hours. “Pusher Trucks are one of the few tools we have that no one else has along the I-5 corridor,” said ODOT Assistant Manager Jeremiah Griffin. Griffin said the pusher trucks, this one called Bulldog on the Siskiyous, are a versatile tool that keeps the summits open. The pusher trucks are just one of the tools ODOT uses to keep the interstate open on the Oregon side. Caltrans picks up the rest to Redding. It’s a partnership renewed before each season in meetings in Ashland and Mt. Shasta; a time to place faces with

names and phone numbers – with the ultimate goal of building relationships. When the snow falls, communication and coordination – and those built relationships – are as valuable as cinder, plows, deicer and salt to keep the pass open to traffic. “We manage I-5 as a corridor with California because there are times when we may have to close the pass for them on the Oregon side, or the same may hold true on the California side,” said ODOT District Manager Jerry Marmon. “The idea is to ensure the public is stopped where they have access to available services – fuel, food and a warm motel room.” Communication is Key That communication and preparation extends to the public. Far too often, drivers approach the passes in winter conditions without being fully ready. They either don’t know the forecast or don’t have their vehicles, or themselves, prepared for winter travel. odotmovingahead.com