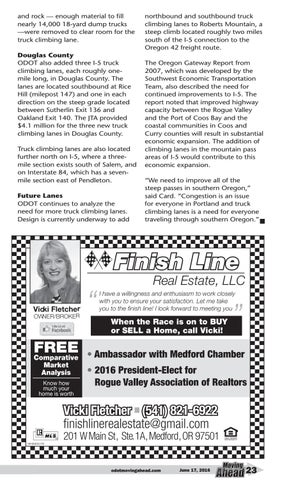 northbound and southbound truck climbing lanes to Roberts Mountain, a steep climb located roughly two miles south of the I-5 connection to the Oregon 42 freight route. The Oregon Gateway Report from 2007, which was developed by the Southwest Economic Transportation Team, also described the need for continued improvements to I-5. The report noted that improved highway capacity between the Rogue Valley and the Port of Coos Bay and the coastal communities in Coos and Curry counties will result in substantial economic expansion. The addition of climbing lanes in the mountain pass areas of I-5 would contribute to this economic expansion. “We need to improve all of the steep passes in southern Oregon,” said Card. “Congestion is an issue for everyone in Portland and truck climbing lanes is a need for everyone traveling through southern Oregon.”