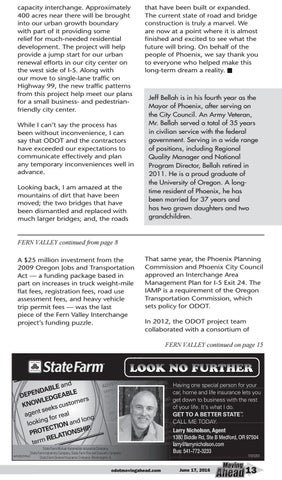 capacity interchange. Approximately 400 acres near there will be brought into our urban growth boundary with part of it providing some relief for much-needed residential development. The project will help provide a jump start for our urban renewal efforts in our city center on the west side of I-5. Along with our move to single-lane traffic on Highway 99, the new traffic patterns from this project help meet our plans for a small business- and pedestrianfriendly city center. While I can’t say the process has been without inconvenience, I can say that ODOT and the contractors have exceeded our expectations to communicate effectively and plan any temporary inconveniences well in advance. Looking back, I am amazed at the mountains of dirt that have been moved; the two bridges that have been dismantled and replaced with much larger bridges; and, the roads

that have been built or expanded. The current state of road and bridge construction is truly a marvel. We are now at a point where it is almost finished and excited to see what the future will bring. On behalf of the people of Phoenix, we say thank you to everyone who helped make this long-term dream a reality.

Jeff Bellah is in his fourth year as the Mayor of Phoenix, after serving on the City Council. An Army Veteran, Mr. Bellah served a total of 35 years in civilian service with the federal government. Serving in a wide range of positions, including Regional Quality Manager and National Program Director, Bellah retired in 2011. He is a proud graduate of the University of Oregon. A longtime resident of Phoenix, he has been married for 37 years and has two grown daughters and two grandchildren.

FERN VALLEY continued from page 8 A $25 million investment from the 2009 Oregon Jobs and Transportation Act — a funding package based in part on increases in truck weight-mile flat fees, registration fees, road use assessment fees, and heavy vehicle trip permit fees — was the last piece of the Fern Valley Interchange project’s funding puzzle.

That same year, the Phoenix Planning Commission and Phoenix City Council approved an Interchange Area Management Plan for I-5 Exit 24. The IAMP is a requirement of the Oregon Transportation Commission, which sets policy for ODOT. In 2012, the ODOT project team collaborated with a consortium of