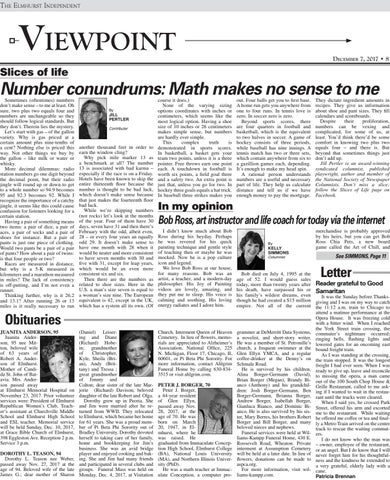 Number conundrums: Math makes no sense to me Sometimes (oftentimes) numbers don’t make sense – to me at least. Oh sure, two plus two equals four and numbers are unchangeable so they should follow logical standards. But they don’t. Therein lies the mystery. Let’s start with gas – of the gallon variety. Why is gas priced at a certain amount plus nine-tenths of a cent? Nothing else is priced this way. Not other things we buy by the gallon – like milk or water or whisky. More decimal dilemmas: radio station numbers go one digit beyond the decimal point, but their radio jingle will round up or down to get to a whole number so 94.9 becomes 95 and 92.3 becomes 92. While I recognize the importance of a catchy jingle, it seems like this could cause confusion for listeners looking for a certain station. Having a pair of something means two items: a pair of dice, a pair of aces, a pair of socks and a pair of shoes for instance. But a pair of pants is just one piece of clothing. Would two pants be a pair of a pair of pants? How about a pair of twins: is that four people or two? Races are measured in distance, but why is a 5-K measured in kilometers and a marathon measured in miles? The lack of consistency is off-putting, and I’m not even a runner. Thinking further, why is it 26.2 and 13.1? After running 26 or 13 miles is it really necessary to run

another thousand feet in order to earn the window cling? Why pick mile marker 13 as a benchmark at all? The number 13 is associated with bad karma – especially if the race is on a Friday. Hotels have been known to skip the entire thirteenth floor because the number is thought to be bad luck, which doesn’t make sense because that just makes the fourteenth floor bad luck. While we’re skipping numbers (not rocks) let’s look at the months of the year. Four of them have 30 days, seven have 31 and then there’s February with the odd, albeit even, 28 – or every four years an equally odd 29. It doesn’t make sense to have one month with 28 when it would be neater and more consistent to have seven months with 30 and five with 31, except for leap years, which would be an even more consistent six and six. Then there are the numbers as related to shoe sizes. Here in the U.S. a man’s size seven is equal to a woman’s size nine. The European equivalent is 42, except in the UK, which has a system all its own. (Of

course it does.) None of the varying sizing options coordinates with inches or centimeters, which seems like the most logical option. Having a shoe size of 10 inches or 26 centimeters makes simple sense, but numbers are hardly ever simple. This complex truth is demonstrated in sports scores. In basketball, a basket gets your team two points, unless it is a three pointer. Free throws earn one point each. A touchdown in football is worth six points, a field goal three and a safety two. An extra point is just that, unless you go for two. In hockey three goals equals a hat trick. In baseball three strikes makes you

(Daniel) Leisering and Diane (Richard) Hobein; grandmother of Christopher, Kyle, Sheila (Brian), Andy (Brittany) and Tressa ; great grandmother of Jimmy and Colton; dear sister of the late Marjorie (Richard) Davison; beloved daughter of the late Robert and Olga. Dorothy grew up in Peoria. She and Jim were married after he returned from WWII. They relocated to Elmhurst, which became her home for 61 years. She was a proud member of Pi Beta Phi Sorority out of Bradley University. Dorothy devoted herself to taking care of her family, home and bookkeeping for Jim’s business. She was an avid bridge player and enjoyed cooking and baking. She and Jim had many friends and participated in several clubs and groups. Funeral Mass was held on Monday, Dec. 4, 2017, at Visitation

They dictate ingredient amounts in recipes. They give us information about shoe and pant sizes. They fill calendars and scoreboards. Despite their proliferation, numbers can be vexing and complicated, for some of us, at least. You’d think there’d be some comfort in knowing two plus two equals four – and there is. But beyond that sometimes things just don’t add up. Jill Pertler is an award-winning syndicated columnist, published playwright, author and member of the National Society of Newspaper Columnists. Don’t miss a slice; follow the Slices of Life page on Facebook.

Bob Ross, art instructor and life coach for today via the internet I didn’t know much about Bob Ross during his heyday. Perhaps he was revered for his quick painting technique and gentle style of teaching then or maybe he was mocked. Now he is a pop culture icon and legend. We love Bob Ross at our house, for many reasons. Bob was an artist, a teacher, and a modern-day philosopher. His Joy of Painting videos are lovely, amazing, and they put me to sleep. His voice is calming and soothing. His loving energy radiates and I adore him.

out. Four balls get you to first base. A home run gets you anywhere from one to four runs. In tennis love is zero. In soccer zero is zero. Beyond sports scores, there are four quarters in football and basketball, which is the equivalent to two halves in soccer. A game of hockey consists of three periods, while baseball has nine innings. A tennis match has two or three sets, which contain anywhere from six to a gazillion games each, depending. It’s enough to make my head spin. A rational person understands numbers are a useful and necessary part of life. They help us calculate distance and tell us if we have enough money to pay the mortgage.

Church. Interment Queen of Heaven Cemetery. In lieu of flowers, memorials are appreciated to Alzheimer’s Association, National Office, 225 N. Michigan, Floor 17, Chicago, IL 60601, or Pi Beta Phi Sorority. For more information, contact Ahlgrim Funeral Home by calling 630-8343515 or visit ahlgrim.com. PETER J. BORGER, 70 Peter J. Borger, a 44-year resident of Glen Ellyn, passed away Nov. 28, 2017, at the age of 70. He was born on March 20, 1947, in Elmhurst, where he was raised. He graduated from Immaculate Conception High School, Elmhurst College (BA), National Louis University (MA), and Northern Illinois University (PhD). He was a math teacher at Immaculate Conception, a computer pro-

merchandise is probably approved by his heirs, but you can get Bob Ross Chia Pets, a new board game called the Art of Chill, and

Bob died on July 4, 1995 at the age of 52. I would guess sales today, more than twenty years after Reader grateful to Good his death, have surpassed his or Samaritan his family’s wildest dreams, even It was the Sunday before Thanksthough he had created a $15 million giving and I was on my way to catch empire. Not all of the current the 11:12 a.m. train to Chicago to attend a matinee performance at the Opera House. It was freezing cold with a bitter wind. When I reached the York Street train crossing, the grammer at DeMerritt Data Systems, commuter’s nightmare occurred; a novelist, and short-story writer. ringing bells, flashing lights and He was a member of St. Petronille’s lowered gates for an oncoming east church, a frequent swimmer at the bound freight train. Glen Ellyn YMCA, and a regular As I was standing at the crossing, coffee-drinker at the Denny’s on the train stopped. It was the longest Schmale Road. freight I had ever seen. When I was He is survived by his children, ready to give up, leave and reconcile Alina Borger-Germann (David), to missing the opera, a man came Brian Borger (Megan), Brandy Bi- out of the 100 South Chop House &amp; anco (Anthony) and his grandchil- Grille Restaurant, called to me askdren: Josh Borger-Germann, Ben ing if I wanted to wait in the restauBorger-Germann, Brianna Borger, rant until the trucks were cleared. Andrew Borger, Isabellah Borger, When I said yes, he crossed Park Gianluca Bianco, and Dominic Bi- Street, offered his arm and escorted anco. He is also survived by his sis- me to the restaurant. While waiting ter, Mary Berres, his brothers Robert he offered me coffee or tea and finalBorger and Bill Borger, and many ly a Metro Train arrived on the center beloved nieces and nephews. track to rescue the waiting commutFuneral services were held at Wil- ers. liams-Kampp Funeral Home, 430 E. I do not know who the man was Roosevelt Road, Wheaton. Private – owner, employee of the restaurant, interment at Assumption Cemetery or an angel. But I do know that I will will be held at a later date. In lieu of never forget him for his thoughtfulflowers, donations can be made to ness and the kindness he extended to aspca.org. a very grateful, elderly lady with a For more information, visit wil- cane. liams-kampp.com. Patricia Brennan