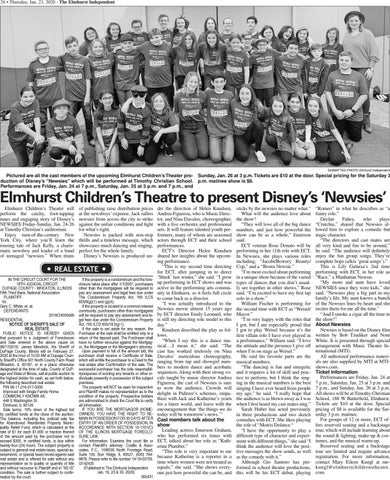 Pictured are all the cast members of the upcoming Elmhurst Children’s Theater pro- Sunday, Jan. 26 at 3 p.m. Tickets are $10 at the door. Special pricing for the Saturday 3 duction of Disney’s “Newsies” which will be performed at Timothy Christian School. p.m. matinee show is $8. Performances are Friday, Jan. 24 at 7 p.m., Saturday, Jan. 25 at 3 p.m. and 7 p.m., and

of publishing raise distribution prices at the newsboys’ expense, Jack rallies newsies from across the city to strike against the unfair conditions and fight for what’s right. Newsies is packed with non-stop thrills and a timeless message, which showcases much dancing and singing, perfect for the whole family. Disney’s Newsies is produced un-

IN THE CIRCUIT COURT FOR THE 18TH JUDICIAL CIRCUIT DUPAGE COUNTY - WHEATON, ILLINOIS Fifth Third Bank, National Association PLAINTIFF Vs. Gary C. White; et. al. DEFENDANTS 2019CH000499 RESIDENTIAL NOTICE OF SHERIFF’S SALE OF REAL ESTATE PUBLIC NOTICE IS HEREBY GIVEN that pursuant to a Judgment of Foreclosure and Sale entered in the above cause on 06/17/2019, James Mendrick, the Sheriff of DuPage County, Illinois will on February 27, 2020 at the hour of 10:00 AM at Dupage County Sheriff’s Office 501 North County Farm Road Wheaton, IL 60187, or in a place otherwise designated at the time of sale, County of DuPage and State of Illinois, sell at public auction to the highest bidder for cash, as set forth below, the following described real estate: PIN 06-11-216-017-0000 Improved with Single Family Home COMMONLY KNOWN AS: 448 S Washington St Elmhurst, IL 60126 Sale terms: 10% down of the highest bid by certified funds at the close of the auction; The balance, including the Judicial sale fee for Abandoned Residential Property Municipality Relief Fund, which is calculated at the rate of $1 for each $1,000 or fraction thereof of the amount paid by the purchaser not to exceed $300, in certified funds, is due within twenty-four (24) hours. The subject property is subject to general real estate taxes, special assessments, or special taxes levied against said real estate and is offered for sale without any representation as to quality or quantity of title and without recourse to Plaintiff and in “AS IS” condition. The sale is further subject to confirmation by the court.

der the direction of Helen Knudsen, Andrea Figueroa, who is Music Director, and Nina Davalos, choreographer, with a live orchestra and professional sets. It will feature talented youth performers, many of whom are seasoned actors through ECT and their school performances. ECT’s Director Helen Knudsen shared her insights about the upcoming performance. “This is my second time directing for ECT, after jumping in to direct ‘Shrek’ last winter,” she said. “I grew up performing in ECT shows and was active in the performing arts community in Elmhurst, so it feels full circle to come back as a director. “I was actually introduced to the Newsies movie almost 15 years ago by ECT director Emily Leonard, who is still my directing role model to this day.” Knudsen described the play as follows. “When I say this is a dance musical….I mean it,” she said. “The cast has worked tirelessly on Nina Davalos’ meticulous choreography, ranging from tap and showgirl numbers to modern dance and acrobatic sequences. Along with their strong vocals taught by music director Andrea Figueroa, the cast of Newsies is sure to wow the audience. Crowds will delight in Pulitzer’s schemes, empathize with Jack and Katherine’s yearn for a fairer world, and leave with the encouragement that ‘the things we do today will be tomorrow’s news.’” Cast members talk about the show Leading actress Emerson Graham, who has performed six times with ECT, talked about her role as “Katherine Plumber.” “This role is very important to me because Katherine is a reporter in a time where women were not treated as equals,” she said. “She shows everyone just how powerful she can be, and

sticks by the newsies no matter what.” What will the audience love about the show? “They will love all of the big dance numbers, and just how powerful the show can be as a whole,” Emerson said. ECT veteran Rose Donato will be performing in her 11th role with ECT. In Newsies, she plays various roles including, “Jacobi/Bowery Beauty/ Cop,” and a “Bronx Newsie.” “I’m most excited about performing in a unique show because of the varied types of dances that you don’t usually see together in other shows,” Rose said. “I’m excited to have my first tap solo in a show.” William Fischer is performing for the second time with ECT as “Weisel/ Mayor.” “I’m very happy with the roles that I got, but I am especially proud that I got to play Weisel because it’s the first villain role I have ever played in a performance,” William said. “I love the attitude and the presence I give off when I’m on stage as Weisel.” He said his favorite parts are the musical numbers. “The dancing is fun and energetic and it requires a lot of skill and practice to perform, but I think the singing in the musical numbers is the best singing I have ever heard from people my age,” he said. “I really hope that the audience is as blown away as I was when I first heard my cast mates sing.” Sarah Huber has acted previously in three productions and two sketch comedies with ECT. She likes playing the role of “Morris Delance.“ “I have the opportunity to play a different type of character and experiment with different things,” she said “I think the audience will love the positive messages the show sends, as well as the comedy with it.” Although Gio Santoro has performed in school theatre productions, this will be his ECT debut, playing

“Romeo” in what he describes as “a funny role.” Declan Fahey, who plays “Crutchie,” shared that Newsies allowed him to explore a comedic but tragic character. “The directors and cast mates are all very kind and fun to be around,” he said. “The audience will definitely enjoy the fun group songs. They’re complete bops (a/k/a ‘great songs’).” This is Lily Galarza’s 2nd time performing with ECT, in her role as “Race,” a Manhattan Newsie. “My mom and aunt have loved NEWSIES since they were kids,” she said. “Newsies play a big part in my family’s life. My aunt knows a bunch of the Newsies lines by heart and she recites them for me all the time.” “And I smoke a cigar all the time in the show!” About Newsies Newsies is based on the Disney film written by Bob Tzudiker and Noni White. It is presented through special arrangement with Music Theatre International (MTI). All authorized performance materials are also supplied by MTI at MTIshows.com. Ticket information Performances are Friday, Jan. 24 at 7 p.m., Saturday, Jan. 25 at 3 p.m. and 7 p.m., and Sunday, Jan. 26 at 3 p.m. All shows will be at Timothy Christian School, 188 W Butterfield, Elmhurst. Tickets are $10 at the door. Special pricing of $8 is available for the Saturday 3 p.m. matinee. For groups of 12 or more, ECT offers reserved seating and a backstage tour, which will include learning about the sound & lighting, make-up & costumes, and the musical warm-up. Reserved seating and a backstage tour are limited and require advance registration. For more information, contact Mary Eileen Kungl at mekungl@elmhurstchildrenstheatre. com.