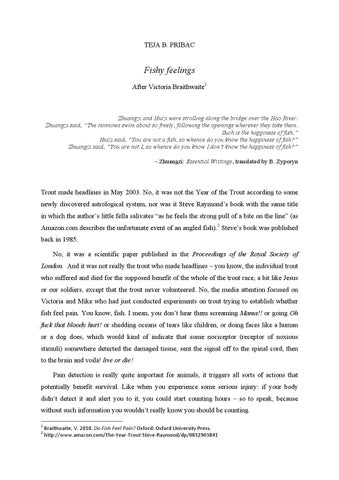 Trout made headlines in May 2003. No, it was not the Year of the Trout according to some newly discovered astrological system, nor was it Steve Raymond’s book with the same title in which the author’s little fella salivates “as he feels the strong pull of a bite on the line” (as Amazon.com describes the unfortunate event of an angled fish).2 Steve’s book was published back in 1985. No, it was a scientific paper published in the Proceedings of the Royal Society of London. And it was not really the trout who made headlines – you know, the individual trout who suffered and died for the supposed benefit of the whole of the trout race, a bit like Jesus or our soldiers, except that the trout never volunteered. No, the media attention focused on Victoria and Mike who had just conducted experiments on trout trying to establish whether fish feel pain. You know, fish. I mean, you don’t hear them screaming Mama!! or going Oh fuck that bloody hurt! or shedding oceans of tears like children, or doing faces like a human or a dog does, which would kind of indicate that some nociceptor (receptor of noxious stimuli) somewhere detected the damaged tissue, sent the signal off to the spinal cord, then to the brain and voila! live or die! Pain detection is really quite important for animals, it triggers all sorts of actions that potentially benefit survival. Like when you experience some serious injury: if your body didn’t detect it and alert you to it, you could start counting hours – so to speak, because without such information you wouldn’t really know you should be counting.                                                                                                                         1 2

Okay, this is not quite so straightforward after all. As P.D. Wall writes: “Nowhere is the problem of pain in humans and [other] animals more deliberately confused than by the introduction of pseudoscience surrounding the word nociception.”3 But definitional and practical issues aside, you’ve got to start somewhere, and Vic and Mike naturally thought it would be a good idea to check out if trout have nociceptors. Believe it or not, at the end of the twentieth century we still had no idea whether the largest group of vertebrates possesses the gross anatomy that might enable some kind of feeling of pain. Gross! Of course, we had lots of reasons not to. Between the mere presence of nociceptors and the subjective experience of suffering there’s a whole huge world of neurobiological and chemical activity as well as several important unknowns, such as what is referred to as the ‘hard problem’, which describes the gap in our understanding of how physical processes inside our body and brain translate into subjective experience, i.e. our feelings. We don’t know how this works in humans either. We just know that we feel and that we are conscious because we can tell it to each other. Other animals of course don’t speak our language so some people say we’ll never know if other animals are conscious, and use this cognitive deficiency as an excuse to position themselves above all other animals. You know, the human way. Anyway, taking all these things into consideration, if they were to demonstrate that fish feel pain, Vic and Mike, inspired by the freshness of the Edinburgh mountain air, or perhaps quietly intrigued by Nessie up north, had to design experiments that would address a few major issues. (P.S. Nessie is actually a trout! Huge, like a whale, you could ride her if she let you. She chooses to remain invisible most of the time though. She feels safer this way because there are too many humans around, she says. She’s like god. She is god, the god of trout: all the other trout were created in her image. And trout apparently really like teasing other peoples, especially humans, even though humans are not aware of this. They say: “Our god lives in Scotland! Where does yours live?” I saw Nessie once. Some ten years ago, I was walking past the Loch after a guided tour to the nearby whisky distillery, and there she was! In all her magnificence. She spoke to me. I couldn’t believe it. And nor do other people when I tell them. You know, people have to see, touch, taste, dissect, destroy, annihilate before admitting existence. That’s why she hides.)

So, for a start Vic and Mike had to find nociceptors. If they discovered nociceptors they’d have to carry out further experiments to make sure that these nociceptors are actually nociceptors and respond to noxious stimuli, then further tests to establish whether the fish are aware and conscious, or even self-conscious. So complex and challenging is this process that it’s no wonder people hadn’t bitten into it before. But let’s start from the beginning. To find out whether fish have nociceptors, Vic and Mike had to kill the fish. Okay, you might think maybe they didn’t need to go to such an extreme, they could have just pricked the fish or something moderately less fatal. But no, see, they weren’t recording nociception in the process of killing the fish, the murder was necessary so that they could then slice up the fish and watch the nerves under a microscope. The first stage was a real success because as it turned out trout have nerves and fibres that look like other animals’ nociceptors! (You can just imagine Nessie leaping in and out of the Loch that day because she hadn’t known this either; she’s not really into science…) Okay, now that the nociceptors had been found, the next thing to do before moving to difficult questions such as fish awareness and consciousness, was to record electrical activity in the nerves to establish that these supposed nociceptors actually relay nociceptive signals. To do that, they had to… well, find a new trout to start with, and then knock the trout unconscious. You might think this is weird (especially given that at this stage we don’t even know if the fish possesses consciousness), but no, it works. As Vic says: “Although the fish were ‘knocked out’ and unaware of what was going on around them, their nervous system was still functioning, and with the appropriate form of stimulation, electrical impulses could pass along the nerves.” And they did! The impulses came through, which brings us to a successful completion of the second stage and the confirmation that nociceptors are well and alive in fish and doing their job. The next thing to check was whether this nerve activity had some kind of impact on the fish that could suggest that fish are capable of experience. Using the dying art of common sense thinking, Vic and Mike figured that to establish the presence of an impact or lack thereof, they could look for physical and behavioural changes such as those that occur in humans when they experience pain. So they settled on observing the trout‘s breathing rate, heart rate and drop in hunger level. Still far from the big question of fish self-awareness,

feeling and consciousness, to measure the trout feeding behaviour, knowing how wary trout are of humans, the researchers placed the tanks with the fish in them behind curtains and watched the trout through the slits in the curtains, ensuring in this way that “we could move and make notes about the various behaviours without the fish being aware of us,” as Vic explains. (Just on the side, in case you don’t know: This awareness business is a huge puzzle, I’m not sure it will ever get solved. Most scientists, philosophers and others preoccupied with the issue agree that nonhuman animals are aware of other creatures and things around them, but they are not sure that animals are aware of themselves. That is, the mind that is aware of the other might not be aware of the self. In other words, I am aware that you are here, but I am not necessarily aware that I am here while I am here being aware that you are here, or I am aware that you are here but I am not aware of the fact that I am aware of your presence while I’m being aware of your presence. This capacity of utter detachment that some humans attribute to nonhuman animals is so amazing and so hard to conceive that we should give big grants out to people willing to work on this mystery.) But back to the trout; sure enough, the trout exhibited all the predicted, human-like changes, confirming in this way that noxious stimuli impact the trout. But do they feel pain? Vic and Mike wrote up their findings up to this stage, and probably much to the satisfaction of the grant-giver they appeared in the above mentioned prestigious publication. Speaking of grantors though, according to the first grant proposal Vic and Mike submitted, they wanted to focus their research on fins and flanks, having the potential welfare of farmed fish in mind, but the scientists judging the application suggested they focus on the mouth, with clearly so-called recreational fishing in mind. And so they did: Vic and Mike explored the mouth of the trout. But not with hooks, as the grantors suggested, no, that would have probably been too impactful for the fish (we wouldn’t want to use the term painful yet since we are still trying to work out if such a thing as fish pain exists), so they used bee venom and vinegar instead. And much to the disappointment of the media surrounding the publication of the study, Vic and Mike could not answer the only questions the media seemed to be interested in: Is angling cruel? Are the fish in pain? This is because Vic and Mike didn’t research angling. They researched the impact of bee venom and acetic acid on the fish nerves and behaviour. (And we shouldn’t underestimate vinegar and bee venom! You have no idea how many fish get bitten by bees! Seriously, bees are second to humans to induce strong fear-like responses in Nessie. Also think of all the

citric acid [maybe lemon juice would have been a better experimental choice than vinegar] that at least in the Mediterranean cuisine is constantly poured on heat-exposed and anaesthesised beyond recovery [read: grilled] trout!) But the real problem of answering the media questions was that none of the evidence gathered in these experiments sufficed to claim without doubt that fish are conscious, selfaware, and can actually feel pain. The best answer Vic and Mike could come up with to address the question about the cruelty of angling was: “Well, possibly…”, and they were not thrilled when the media twisted their words and made angling sound cruel. Because, you see, no good professional will scream in horror and urge the world to stop angling (and similar practices) until further research establishes that fish don’t feel pain. No, a good professional will leave the society and all its weird habits and (mis)conceptions alone until there’s absolutely no doubt that suffering beyond measure is occurring, and only then will they advance the idea that perhaps, you know, if there’s a chance, maybe, if it’s not too inconvenient economically or too disruptive to your weekend plans or Friday night dinner with friends… we might, you know, possibly… try to find a more humane way of …? So scientists designed other experiments that would address these big dilemmas around fish subjectivity, like many other scientists are doing with other animals, over and over again, trapped, caged, electrocuted, starved, prived and deprived, sliced up and sewn back together, dead or alive, to prove something that can never be proven to those who refuse to see, touch, taste… with their heart. Hide, Nessie, hide.