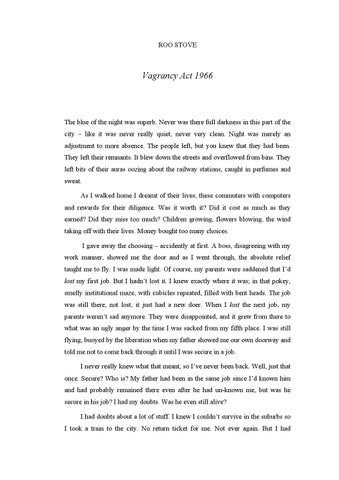 The blue of the night was superb. Never was there full darkness in this part of the city – like it was never really quiet, never very clean. Night was merely an adjustment to more absence. The people left, but you knew that they had been. They left their remnants. It blew down the streets and overflowed from bins. They left bits of their auras oozing about the railway stations, caught in perfumes and sweat. As I walked home I dreamt of their lives, these commuters with computers and rewards for their diligence. Was it worth it? Did it cost as much as they earned? Did they miss too much? Children growing, flowers blowing, the wind taking off with their lives. Money bought too many choices. I gave away the choosing – accidently at first. A boss, disagreeing with my work manner, showed me the door and as I went through, the absolute relief taught me to fly. I was made light. Of course, my parents were saddened that I’d lost my first job. But I hadn’t lost it. I knew exactly where it was; in that pokey, smelly institutional maze, with cubicles repeated, filled with bent heads. The job was still there, not lost, it just had a new doer. When I lost the next job, my parents weren’t sad anymore. They were disappointed, and it grew from there to what was an ugly anger by the time I was sacked from my fifth place. I was still flying, buoyed by the liberation when my father showed me our own doorway and told me not to come back through it until I was secure in a job. I never really knew what that meant, so I’ve never been back. Well, just that once. Secure? Who is? My father had been in the same job since I’d known him and had probably remained there even after he had un-known me, but was he secure in his job? I had my doubts. Was he even still alive? I had doubts about a lot of stuff. I knew I couldn’t survive in the suburbs so I took a train to the city. No return ticket for me. Not ever again. But I had

uncertainties about the quality of life I could afford. Twenty five dollars and some chewing gum would not last. When I arrived at the doors of what was then known as The Department of Social Security, I couldn’t walk in. There was a sinister but invisible punch going on. You could see people, actually watch people, walk up to the doors with a straight back and as they went through the door an unseen force would whack shame right on into their being and they would slump, beaten. The Government had to write instructions and directions on the floor of the office because nobody would look up after that punch. The shame was too heavy. “Wait here. Follow the Blue Line to forms. Red Line to Family Allowance.” Secure. Security. It seemed important to my father and to the Government, so it began to scare me. To do all you could do to gain a sense of security in society’s eyes appeared to ultimately lead to humiliation, or some form of submission. I saw the people leave that Government building compressed small into their own sense of failure. Nobody smiled leaving. In the end I remained on the outside, I did not apply for the Dole. I could not walk through that door. Surely I could make it on my own? Really, did I even need to be that socially secure? That was many years ago. Eventually, the Government changed the name of The Department of Social Security. They knew they were aiming too high, professing to provide social security to the needy. Give the perpetually poor a Welfare Department that does not offer them the unreachable. Social security for every underprivileged person costs more than any Government can afford. It began to drizzle a little bit, making oily road rainbows under each street light as I walked toward my place. I could hear sirens in the less sleepy part of the city; the area that rouses when the rest of town slips to sleep. Where once in the middle of the night I’d had my identification stolen and I thought it best to let it become the last time I was ever irrefutably me. I didn’t replace any of my personal documents. There didn’t seem to be a point. It meant I could be anyone. I didn’t want any documents or cards confirming I shared my father’s last name. The man would never let me back home; he proved it that first winter when I had pneumonia. All I had really wanted was a soothing word from my mother,

but she shut herself in their bedroom afraid, while my father, irate, sent me away again, rejected and cold. It was a tough winter but I made it through. The theft of my ID was like a new beginning. With a new cheerfulness, I wanted to put from my mind the false start of a scanty childhood and construct a new start, a purposeful middle and perhaps a spectacular end. No more would I carry reminders of who I was. That person was my father’s failure. I could be my own success – on my own terms. Around this time I met Balthazar. He fast became my best friend. We hung together most days and I learnt a great deal from him. For someone young, he was sophisticated, street-wise and world-wise. There was confidence in his every move. People openly stared as we walked down the street. Balthazar had a presence. One Friday we were sitting in a cafe having a silly religious debate about the legitimacy of the Bible as basis for religious construct. “The Bible is not about truth of mind, but truth of heart,” Balthazar was saying, when two policemen approached us. “It’s... ” “We’re going to have to move you on,” one of them said to me. “What? Why? Were we being too loud? We can quieten down.” “Do you have any money?” the Policeman asked me as if I hadn’t spoken. “What? No. But Balthazar here’s going to pay.” The Policeman looked confused. “Do you have any ID?” he asked me. “No, but... ” “Do you want to be charged with Loitering?” “No! Of course I don’t. But we weren’t loitering. We’re waiting for an order. Get your hands off me!” The back of a Paddy Wagon is not very comfortable. The Psychiatric Unit the Police tumbled us toward has since closed down, and that’s a good thing. It was appalling. They had me on a seventy-two-hour hold, but after seeing the magistrate, it was another two months before I was allowed out. Needles were

plunged into me. I was separated from Balthazar. I could barely function. Nothing made sense. Ugly things happened in there that I cannot even begin to talk about. It was like I’d been plunged off the irregular edge of reality and was never quite able to regain my footing. Eventually, I realised that I needed to deny Balthazar even existed before I’d be released; which was crazy. “Balthazar is not real,” I finally said, trampled into acquiescence. “I was delusional.” The whole experience left me with a healthy fear of policemen and doctors. It was so long ago now, but whenever I see a policeman I have a full blown anxiety attack and I need to put distance between us immediately. Even the sirens I heard as I made my way home tilted my world unsteady. However, there is joy in my life, when it is still. Nobody can take that away or make me deny it. A warm afternoon in the park with the regulated sound of the sprinklers twirling arcs of water across the gardens can soothe me to sleep. The crackle of autumn leaves under foot can put a snap in my step, and finding money on the ground can buy me a bonus cup of coffee. When I finally reached my home I found there was someone asleep in my doorway. “Balthazar?” I asked, excited. “Go away,” mumbled the stranger. He was wrapped in my blanket. “But this is my spot.” I said, before I walked away. Peace being all I’ve ever really wanted. The rain had eased and I thought perhaps I’d wander up to the church. Sometimes I’d find Balthazar there in the walled gardens, always ready with his hello grin and a story. Other times, as the city’s night sound muted into that fleeting hush before the rush, I’d just find a little peace.