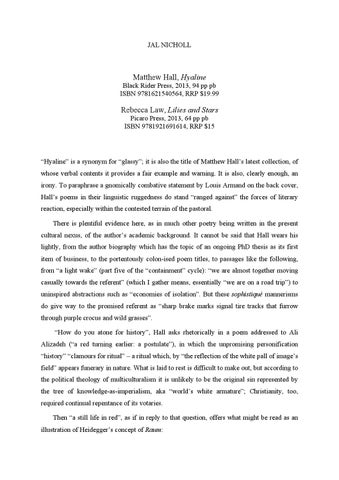 “Hyaline” is a synonym for “glassy”; it is also the title of Matthew Hall’s latest collection, of whose verbal contents it provides a fair example and warning. It is also, clearly enough, an irony. To paraphrase a gnomically combative statement by Louis Armand on the back cover, Hall’s poems in their linguistic ruggedness do stand “ranged against” the forces of literary reaction, especially within the contested terrain of the pastoral. There is plentiful evidence here, as in much other poetry being written in the present cultural nexus, of the author’s academic background. It cannot be said that Hall wears his lightly, from the author biography which has the topic of an ongoing PhD thesis as its first item of business, to the portentously colon-ised poem titles, to passages like the following, from “a light wake” (part five of the “containment” cycle): “we are almost together moving casually towards the referent” (which I gather means, essentially “we are on a road trip”) to uninspired abstractions such as “economies of isolation”. But these sophistiqué mannerisms do give way to the promised referent as “sharp brake marks signal tire tracks that furrow through purple crocus and wild grasses”. “How do you atone for history”, Hall asks rhetorically in a poem addressed to Ali Alizadeh (“a red turning earlier: a postulate”), in which the unpromising personification “history” “clamours for ritual” – a ritual which, by “the reflection of the white pall of image’s field” appears funerary in nature. What is laid to rest is difficult to make out, but according to the political theology of multiculturalism it is unlikely to be the original sin represented by the tree of knowledge-as-imperialism, aka “world’s white armature”; Christianity, too, required continual repentance of its votaries. Then “a still life in red”, as if in reply to that question, offers what might be read as an illustration of Heidegger’s concept of Raum:

a place cleared and freed for settlement and lodging. A space is something that has been made room for, something that is cleared and free, namely within a boundary, Greek peras. A boundary is not that at which something stops but, as the Greeks recognised, the boundary is that from which something begins its presencing. That is why the concept is that of horismos, that is, the horizon, the boundary. This notion of a qualitatively definite space is proposed here in contrast to a space characterised by boundlessness and universal homogeneity. The “red” of Hall’s “still life” is no longer that of a blood debt, but of a bloodline, while the “bronze” is that of the earth, “The trodden path whose witness is just / That which we are”: Mark me in bronze whose limits Are underfoot, the bare turn ing of earth, of glutted horizons Matching the trail of morning dust. Besides the use of metalanguage and language as metaphor, a yet more striking fact about Hall’s style is how, at the expense of frequent obscurity, he is able to clear a space for a kind of concrete description that is very far from naturalism. This can be felicitous on an intellectual level: All aspects of the visual field Annealed in the rotund horizon The intrinsic curve of a tungsten sky (“artifice”) The pairing of “annealed” with “tungsten” works because that metal, it turns out, has the highest melting point of any element. The resulting figure is a metaphor resting on a scientific allusion that lacks intrinsic emotional resonance because the physical properties of most entries on the Periodic Table (oxygen, gold, etc. excluded) have little to do with the perception of landscape – outside, perhaps, of a descriptive passage in a novel whose protagonist is a research chemist. So as not to hang too much weight on a single example, I quote the following as well, from “screens westward of migration”: “Blotched skies the colour of lectin erasures”, which I gather may have something to do with the deleterious behaviour of a particular class of proteins in the small intestine. However, Hall also writes passages which fascinate with a genuine lyricism: “Our treasured loss in the curve of grainfed light; cut by stalk, elated in the

vertices of claw” (“what wildly halts: a meditation on clearing”). Here, the use of agricultural and mathematical imagery is apt to communicate in clear and affecting images even where the poetic argument is suppressed. Matthew Hall is a serious poet, and Hyaline is a book for readers prepared to give as well as to receive. Many an avant-garde poet lapses into sentimentality the moment he or she allows ingress to recognisable emotion; Hall’s challenging aesthetic pays off, however, enabling him to richly explore and dramatise his meditative habitations and cohabitations. As a result, Hyaline is a rich, exploratory and unexpectedly dramatic work.

Like Matthew Hall, Rebecca Law lists her academic credentials; in her case, however, it seems that wry humour is in play, noting as she does that she received second class honours in her Masters (in Poetry, at The University of Melbourne). Of course, going to university for a decade or more is just a rite of passage in today’s world, and rites of passage are undoubtedly a prominent theme in the volume. On the first page we find a meditation on a different kind of journey “into adulthood”: Mother you are always old for your years, my own growth distanced more and more into adulthood, the shade stepped out of once, debutante to world … (“Infusions of Shoreline Flora”) What does it mean to be a “debutante” today? The word is an archaism mocked by the coming-of-age rituals of suburban youth, and the poem’s subsequent imagery of scented pillows, lavender bouquets and starry nights is apt to seem sentimental. But is sentimentality the same as nostalgia? A concern with childhood and, by implication, innocence is cultivated from the outset in “The Shivering Song”, with its evocation of nursery rhymes: Round, round a moat must lie Cross the bridge and never die Here the fairy tale image of a moat is telling in its inherent archaism and as a symbol of protection. “The Purpose of Purity”, too, illustrates a proto-narrative of winged purity and freedom (the image of the dove with its amorous connotations), imagery of child’s play (blowing soap bubbles), and the conclusion:

Once we gambolled to victory and found shelter That is, “Shelter” of the kind depicted in the image on the volume’s cover: Pierre August Cot’s The Storm, which depicts a young man and woman fleeing the elements together. The longer poem, “Braids, Snow and Clouds”, begins with a detailed description of riparian scenery near the shelter of “our home”. A prose description of a storm intervenes, during which a pair of undefined cohabitants amuse themselves in a cosy domestic setting; then there follows a dialogue in which the content shifts from love (“Do you think love is about pyjamas?”), to reminiscence of family (“My mother used to be an ice-skater”), to death (“Death is not the end of living”), to a loneliness assuaged by mysterious communion (“I can almost stop pretending I am all alone”). The final part of this poem develops the latter theme into a confession that, in fact, the speaker has been alone all this time. To whom the poem’s various pronouns refer is deliberately rendered mysterious. It is not solely the sturm und drang of romantic love à la Cathy and Heathcliff that is the object of longing in these pages; the storm imagery prevalent in the book refers, here at least, to something that is to be enjoyed at a distance and in its season, but from which shelter is ultimately sought, even if “my shivering / is more reverence / than dislike” (“Kalorama Park”). The adult female speaker recalls her own childhood and, interestingly, her mother with nostalgia while braving her current loneliness: I do not cry because I have my little black cat I do not cry because I have my little brown dog That the speaker’s mother was an ice-skater is telling, given that this is all we find out about her. Ice-skating is a venturesome activity that the advanced practitioner makes appear easy. The most obvious contrast between the speaker and her mother in the poem is that the former remains indoors, consoled for her loneliness and fear of death by fossils (“signs of life”) and other solaces of doubtful efficacy. It is possible to read the vexed identities of the speaker, addressee and “friend” in mythological terms as Aphrodite, Persephone and Adonis respectively, the myth functioning as an allegory of the tragedy inherent in modern courtship from a female perspective. Adonis is the perfect consort that the modern woman is liberated to pursue but whom she cannot lastingly possess; Aphrodite is, of course, the eternal symbol of female desire and

desirability; Persephone, in contrast, the consort of death, with whom the goddess of love must cyclically share her beloved; yet this same Persephone, also known as Kore, “daughter”, represents the transience and cyclicity of life to which Aphrodite is blind. It is a short step from classical mythology to evolutionary psychology, which would comprehend the cyclical sharing of Adonis between the two goddesses as symbolic of female hypergamy. Aphrodite’s eternal pursuit – hunting the hunter – will obviously tend towards pathos when translated from eternity to the mortal world. Here the metaphorical “howling” of wind, in a continuation of storm imagery, redounds in a subtle de-sublimation upon the noise of animals in heat: It was this howling I wanted to love forever heaving my backbone in my sleep (“Form Of") According to one possible reading, the elemental imagery of this collection might be taken for the revenants of the passion of youth transmuted to “eternal moods of the bleak wind”, to quote Ezra Pound (“[Greek]”). I have discussed what appears to me to be the dominant theme in what remains a manysided and sophisticated collection of lyrics. Not all the birds are swans or doves, however, and neither the shelter of love and home nor the freedom of the open skies is presented in excessively utopian terms. Lilies and Stars is, as its title suggests, a volume replete with romantic longing, but also with romantic irony as the persona and her world participate together in what feels like a passionate and two-sided love affair.