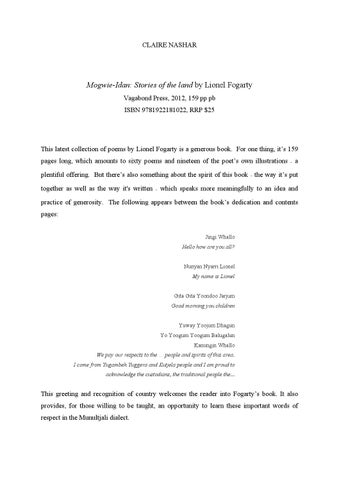 This latest collection of poems by Lionel Fogarty is a generous book. For one thing, it’s 159 pages long, which amounts to sixty poems and nineteen of the poet’s own illustrations ‒ a plentiful offering. But there’s also something about the spirit of this book ‒ the way it’s put together as well as the way it's written ‒ which speaks more meaningfully to an idea and practice of generosity. The following appears between the book’s dedication and contents pages: Jingi Whallo Hello how are you all? Nunyan Nyarri Lionel My name is Lionel Gita Gita Yoondoo Jarjum Good morning you children Yuway Yoojum Dhagun Yo Yoogum Yoogum Balugalun Kanungin Whallo We pay our respects to the … people and spirits of this area. I come from Yugambeh Yuggera and Kutjela people and I am proud to acknowledge the custodians, the traditional people the...

This greeting and recognition of country welcomes the reader into Fogarty’s book. It also provides, for those willing to be taught, an opportunity to learn these important words of respect in the Munultjali dialect.

Mogwie-Idan is dedicated to Fogarty’s son, Jabreeni, and to his grandchildren and “family kinship grandchildrens”. So the children he greets in his welcome might be these young family members. They might also be the children of Aboriginal Australia or, even more broadly, all Australian children, Indigenous and non-Indigenous alike. Whatever the case, there’s a sense that Fogarty writes for the future, for the embattled idea that poetry really might provoke change ‒ in us as individuals as much as in the governments we vote into power. Fogarty’s poetry has long been aware of its divided audience; of the differences between its Indigenous and non-Indigenous readerships. This is evident in the poetry of Mogwie-Idan which, as the initial welcome signals, often takes the form of direct address. In “TOKEN BLINDFOLDED ADVISORY ABORIGINAL COUNCIL ZIG ZAG NEWS WE BLAME YOUSE”: ABO’S THAT ARE IN THE PIT OF ASSAULTING JARS MY PITJANTAJARA CRY A SAD MELTING LAND RIGHTS COPE NO MORE DON’T DO IT. THE FIGHT STILL CRYS CRY FOR YOUSE I DON’T HATE WHITE PEOPLE I DON’T SAVE BLACK PEOPLE I WON’T HELP KILL YOU STRANGLED OPPRESSED RUSHING AFRAIDNESS FOR USE BUT PURSUE FREEDOM I DO BUT KILL INDUSTRY RACIST I DO JUSTIFY TO YOU I WON’T DO FUCK YOU

In this passage alone, the ‘you’ to whom the poem speaks shifts a number of times. Sometimes it addresses “BLACK PEOPLE”, sometimes “WHITE PEOPLE”, and other times it appears to concern itself with both groups. Within these categories of address, Fogarty’s tone also varies considerably. It ranges from a deep sadness and tenderness for his people, like the Pitjantajara cry above (“STRANGLED OPRESSED RUSHING AFRAIDNESS / FOR USE”), to the militant imperatives of “PARADOX HEARING”: KILL THE OPPRESSOR BLACK WRITERS AS BLACK WRITERS WE MUST CAUSE PRESSURES TO THE BLACKS TO GET UP AND FIRE THE WHITE EDITORS AND WHITE PUBLISHING HOUSE DOWN TO THE GROUNDS WHERE WE TAKE AND BURN THE MARKET PLACES TO A UNFAMILIAR EXCHANGEABLE

As always with Fogarty’s work, the non-Indigenous reading experience of Mogwie-Idan is often uncomfortable: “BUT SITTING HERE BLOCKING OUT THE UNJUSTIFIABLE SINS / SINS ARE WHAT YOU ARE DOING” (“BURN THE BRIDGES”). This book remains in many ways angry, and in no way weakens the unrelenting brand of activism that has grown to be part of Fogarty’s hallmark. There is, however, a sense of frustration in the poems of Mogwie-Idan that feels more urgently sorrowful than in his earlier books: I DON’T LOVE YOUR DAUGHTER FOR FUN I DON’T SADDEN YOUR FEELINGS FOR FUN I WON’T LIVE WAYS YOU GIVE KNOWING IT CEASES WHEN YOU WANT IT TO I WON’T LAY MY MIND TO BE PICKED I WILL FORM MY BODY FRESH I WILL LOVE YOUR CHILDREN BUT FUCK ME WHEN I SAVE YOU SOMETIMES THAT’S ALL I DO

The book is divided into two sections.

REQUITAL”, won the 2012 Scanlon Award as a chapbook, and is written entirely in capital letters. The second, and longer of the two, shares its name with the book’s title and contains a range of poems, some written in the last few years, others (like “Overseas Telephone”) dating from as early as May 1990. Ideas of kin and kinship, and their importance in keeping Indigenous culture alive, recur again and again throughout both sections of Mogwie-Idan in poems like “Murri Yubba Paul in Goori”, “Our Dance Must Never Die”, and “Yugambeh Talga”. The last of these is a song “taken from the book Yugambeh Talga, Music Traditions of the Yugambeh People”. “Lottie (Levinge) Eaton”, a note at the start of the poem tells us, “remembers her grandmother, Mrs Jenny Graham, singing [it] to her when she was a little girl”. Such intergenerational transmissions of culture seem to be a part of what Fogarty means when he writes of “CONNECTION REQUITAL”. In the title poem of that section: GENERATIONS OF SANDS MOVING BY THE WINDS ALL YOU ARE MY RELATIONS MIXED ELOQUENTLY AS LIFE GOES ON

For the most part, the poetic tactics of Mogwie-Idan remain those of Fogarty’s signature ‘guerrilla poetics’. The first line of “Priority” is a good example: “Void mirrors worth life reflections”. The agrammatical form the poetry takes characteristically disrupts and resists

any attempt at a conventional English reading experience, and in its place substitutes a proliferation of experiences and meanings. The words “void” and “worth”, for instance, could be read as imperatives ‒ “Void mirrors! Worth life reflections!” ‒ or they might be nouns, connected by the word “mirrors”, now a verb: “Void mirrors worth”. Another possibility might be to read “void” and “life” as imperatives, making “mirrors” a possessive: “Void mirrors’ worth! Life reflections!” As Ali Alizadeh points out in his introduction to MogwieIdan, it would be to oversimplify and understate the sophistication of Fogarty’s poetry to frame it exclusively as “the application of a postcolonial poetics” – designed to turn the tables on colonial oppression, and not much more. The poems, he argues, “remain too linguistically mischievous and conceptually challenging to be seen [solely] as celebrations of a cultural milieu or the articulations of an ethnic condition”. It’s an observation which strikes true: the sense of verbal play and intellectual verve in Fogarty’s poetry overreaches such attempts at classification. Alizadeh’s introduction is attentive to Fogarty’s poetry, and to the poems of MogwieIdan, but also can’t seem to resist having a few digs at the rest of Australian poetic culture. It describes a “literary environment saturated with hyperbolic praise and prize money heaped upon young mediocrities and their older, overrated mentors and benefactors” ‒ a criticism levelled equally at the “proponents of popular culture and postmodernism” (who cherish “superficial, playful experimentalism”) and at the “conservative aesthetes” (who expect only “facile, sentimental” evocations of “place and landscape” from Indigenous artists). Such arguments are no doubt designed to demonstrate the singularity of Fogarty’s poetry, but they do so in a way which undermines Mogwie-Idan’s impulse towards the generosity of “CONNECTION REQUITAL”.