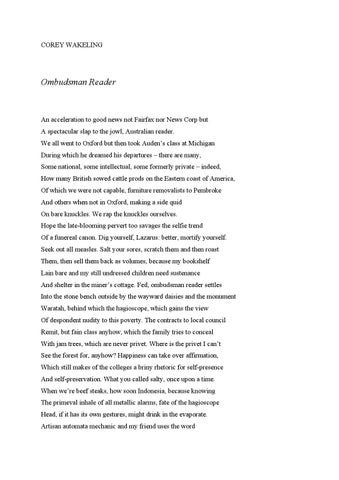 An acceleration to good news not Fairfax nor News Corp but A spectacular slap to the jowl, Australian reader. We all went to Oxford but then took Auden’s class at Michigan During which he dreamed his departures – there are many, Some national, some intellectual, some formerly private – indeed, How many British sowed cattle prods on the Eastern coast of America, Of which we were not capable, furniture removalists to Pembroke And others when not in Oxford, making a side quid On bare knuckles. We rap the knuckles ourselves. Hope the late-blooming pervert too savages the selfie trend Of a funereal canon. Dig yourself, Lazarus: better, mortify yourself. Seek out all measles. Salt your sores, scratch them and then roast Them, then sell them back as volumes, because my bookshelf Lain bare and my still undressed children need sustenance And shelter in the miner’s cottage. Fed, ombudsman reader settles Into the stone bench outside by the wayward daisies and the monument Waratah, behind which the hagioscope, which gains the view Of despondent nudity to this poverty. The contracts to local council Remit, but fain class anyhow, which the family tries to conceal With jam trees, which are never privet. Where is the privet I can’t See the forest for, anyhow? Happiness can take over affirmation, Which still makes of the colleges a briny rhetoric for self-presence And self-preservation. What you called salty, once upon a time. When we’re beef steaks, how soon Indonesia, because knowing The primeval inhale of all metallic alarms, fate of the hagioscope Head, if it has its own gestures, might drink in the evaporate. Artisan automata mechanic and my friend uses the word

Breatharian, which is likeable on the East coast, since it has little Masonic origin, whereas get further south and you might have Protests against your Rosicrucianism. Fuck such protests When the slap or the knuckle rap bests alertness. The caravan has cruised all day without interruption, if We keep pushing we’ll make it to camp in time For the burials. No contract has any place there, and though They might get us to sign some documents later I do think we’ve out-run the bureaucrats, their manners Giving our acceleration more than a day’s grace. Can the selfie face the bankruptcy, though? Make more musical Trinkets to invite, if not gods, then sacrifices. We are happy invoking our names in sport, it appears. Eddie Goes to Poetry City but do I go to Adelaide, and is this The joke behind the waiter that does not act. This sounds like all the political writers condemned to death, Antipathetic even to the casual foodie at the upmarket Restaurant where Mephistopheles always eats, Surrounded by a goat herd whose landscape feed is replaced With corn, and we know what this does to their eyes: It turns them red waratah. Speechless, reader. Do not eat what aspic preserves.