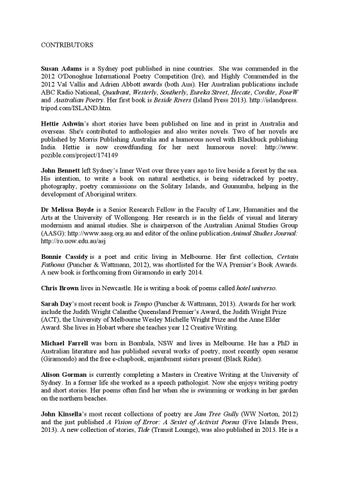 CONTRIBUTORS Susan Adams is a Sydney poet published in nine countries. She was commended in the 2012 O'Donoghue International Poetry Competition (Ire), and Highly Commended in the 2012 Val Vallis and Adrien Abbott awards (both Aus). Her Australian publications include ABC Radio National, Quadrant, Westerly, Southerly, Eureka Street, Hecate, Cordite, FourW and Australian Poetry. Her first book is Beside Rivers (Island Press 2013). http://islandpress. tripod.com/ISLAND.htm. Hettie Ashwin’s short stories have been published on line and in print in Australia and overseas. She's contributed to anthologies and also writes novels. Two of her novels are published by Morris Publishing Australia and a humorous novel with Blackbuck publishing India. Hettie is now crowdfunding for her next humorous novel: http://www. pozible.com/project/174149

John Bennett left Sydney’s Inner West over three years ago to live beside a forest by the sea. His intention, to write a book on natural aesthetics, is being sidetracked by poetry, photography, poetry commissions on the Solitary Islands, and Guunumba, helping in the development of Aboriginal writers.

Dr Melissa Boyde is a Senior Research Fellow in the Faculty of Law, Humanities and the Arts at the University of Wollongong. Her research is in the fields of visual and literary modernism and animal studies. She is chairperson of the Australian Animal Studies Group (AASG): http://www.aasg.org.au and editor of the online publication Animal Studies Journal: http://ro.uow.edu.au/asj Bonnie Cassidy is a poet and critic living in Melbourne. Her first collection, Certain Fathoms (Puncher & Wattmann, 2012), was shortlisted for the WA Premier’s Book Awards. A new book is forthcoming from Giramondo in early 2014. Chris Brown lives in Newcastle. He is writing a book of poems called hotel universo. Sarah Day’s most recent book is Tempo (Puncher & Wattmann, 2013). Awards for her work include the Judith Wright Calanthe Queensland Premier’s Award, the Judith Wright Prize (ACT), the University of Melbourne Wesley Michelle Wright Prize and the Anne Elder Award. She lives in Hobart where she teaches year 12 Creative Writing. Michael Farrell was born in Bombala, NSW and lives in Melbourne. He has a PhD in Australian literature and has published several works of poetry, most recently open sesame (Giramondo) and the free e-chapbook, enjambment sisters present (Black Rider). Alison Gorman is currently completing a Masters in Creative Writing at the University of Sydney. In a former life she worked as a speech pathologist. Now she enjoys writing poetry and short stories. Her poems often find her when she is swimming or working in her garden on the northern beaches. John Kinsella’s most recent collections of poetry are Jam Tree Gully (WW Norton, 2012) and the just published A Vision of Error: A Sextet of Activist Poems (Five Islands Press, 2013). A new collection of stories, Tide (Transit Lounge), was also published in 2013. He is a

Professorial Research Fellow at the University of Western Australia and a Fellow of Churchill College, Cambridge University. Claire Nashar lives in Sydney. She is the curator of the Australian Poetry Library and is currently working on a translation of Louis Aragon’s Le Fou d'Elsa. Jal Nicholl lives in Melbourne where he works as a teacher and writer. His poems and reviews have appeared in various online and print venues, including The Age, Cordite and Overland. Teja B. Pribac works as a freelance translator, and engages in different visual and verbal art forms as a hobbyist. She’s currently a doctoral candidate at the University of Sydney researching animal grief, and completing a vegan cookbook. She lives in the Blue Mountains of New South Wales with various rescued animals. Angela Rockel lives in Tasmania. ‘Owl’ is based on an entry from her silver hill blog: www.onsilverhill.blogspot.com.au Frank Russo’s writing has appeared in The Weekend Australian, Southerly, Transnational Literature, Blue Crow, in various anthologies and broadcast on radio. The manuscripts for his novels have been short-listed for the Vogel/The Australian Literary Prize and other prizes. He is completing a Doctor of Arts at the University of Sydney. Roo Stove attained a Master of Arts in Creative Writing in 2012. ‘On completion,’ she writes, ‘exhausted, the idea of actually writing again seemed absurd. But, before too long, there was a trip over the perpetual inclination to write and once more words began to fall on to paper. Some of them made sense.’ Christine Townend has had poetry, short stories and seven books published. She founded Animal Liberation in Australia in 1976 and in 1980 she and Peter Singer founded Animals Australia. For 17 years she lived in India as managing trustee of an animal shelter in Jaipur. During this time she founded two animal shelters in Kalimpong and Darjeeling (West Bengal). Milly Vranes lives and works in Sydney. She has contributed works to the children's nonfiction market, and to the NSW School Magazine. When not running around after four cats and a rabbit she writes and sketches. She is presently working on a novel examining the effects of grief on teenagers. Corey Wakeling lives in Melbourne. His poetry appears regularly in Australian and international journals and anthologies. He is the author of chapbook Gargantuan Terrier, Buggy or Dinghy (Vagabond Press, 2012) and Goad Omen (Giramondo, 2013). He is a tutor in literature and theatre studies at the University of Melbourne, reviews editor of poetry journal Rabbit, and interviews editor of Cordite.