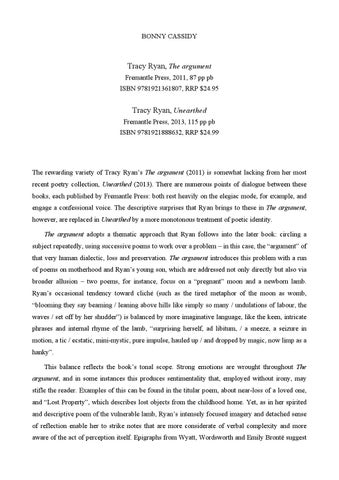 The rewarding variety of Tracy Ryan’s The argument (2011) is somewhat lacking from her most recent poetry collection, Unearthed (2013). There are numerous points of dialogue between these books, each published by Fremantle Press: both rest heavily on the elegiac mode, for example, and engage a confessional voice. The descriptive surprises that Ryan brings to these in The argument, however, are replaced in Unearthed by a more monotonous treatment of poetic identity. The argument adopts a thematic approach that Ryan follows into the later book: circling a subject repeatedly, using successive poems to work over a problem – in this case, the “argument” of that very human dialectic, loss and preservation. The argument introduces this problem with a run of poems on motherhood and Ryan’s young son, which are addressed not only directly but also via broader allusion – two poems, for instance, focus on a “pregnant” moon and a newborn lamb. Ryan’s occasional tendency toward cliché (such as the tired metaphor of the moon as womb, “blooming they say beaming / leaning above hills like simply so many / undulations of labour, the waves / set off by her shudder”) is balanced by more imaginative language, like the keen, intricate phrases and internal rhyme of the lamb, “surprising herself, ad libitum, / a sneeze, a seizure in motion, a tic / ecstatic, mini-mystic, pure impulse, hauled up / and dropped by magic, now limp as a hanky”. This balance reflects the book’s tonal scope. Strong emotions are wrought throughout The argument, and in some instances this produces sentimentality that, employed without irony, may stifle the reader. Examples of this can be found in the titular poem, about near-loss of a loved one, and “Lost Property”, which describes lost objects from the childhood home. Yet, as in her spirited and descriptive poem of the vulnerable lamb, Ryan’s intensely focused imagery and detached sense of reflection enable her to strike notes that are more considerate of verbal complexity and more aware of the act of perception itself. Epigraphs from Wyatt, Wordsworth and Emily Brontë suggest

Ryan’s models in achieving that quality of poetic voice. I would argue that the outstanding poems of The argument are those in which Ryan turns her lyric concentration away from personal loss, towards meditations on the more-than-human world. She creates memorable, fleeting glimpses of fauna in “Frogmouth” and “Deer and Sylvia”; and constructs a suite of poems about the transient nature of inanimate subjects such as dust, cobwebs, smoke and mould: In this unprecedented heat, like one slow to take note though not yet quite insensate, I begin to catch on: that fruit, uneaten on the bench, keeping roughly its shape but on the turn, gone lean with subtle putrefaction, lost collagen in an old cheek, learn what we are dealing with here, your only sign a tiny under-puddle, impolite on otherwise neat formica. Ever efficient, you strike from the inside. (“Mould”) “Mould” and its fellow ‘substance poems’ might borrow from medieval riddle: dramatising their unlovely subjects, they spin accretive metaphors. As The argument continues Ryan takes this approach further, through a series of long sequences. The confessional voice is pleasingly complicated by the uneven respiration and narrative potential of these linked short poems – culminating in a dreamy, haunting sequence, “To Abelard, Heloise”. Here, Ryan’s elegiac conceit takes place on the page, since the broken structure of the sequence form mimics dialogue and shifting viewpoints. Simultaneously, she moves toward extended lines that tend to atomise the more unified, subjective voice in The argument. These long lines are exemplified in “The Fall”, which achieves a structural match for its subject – autumn – by using paratactic phrases to negate, gather, then scatter images: Not slowly and piece by piece like those leaves in the Gambier woods, death’s legerdemain, distraction, not tantalising, not promising but sudden as new snow, heaped instantly, or icy downpour out of season – neatly, craven in capitulation, my body found it could meet its match: that interval not yet chalked or cordoned off where I too must stretch and lie, I too, as if it’s taken this long and this much to whittle the monstrous ego down. (“The Fall”) In her latest book, Unearthed, Ryan explores the possibilities of formal “reconstruction” to a lesser extent. A notably strong poem in the collection, “Unearthed [1988]”, is comparable to the

structural conceit of “The Fall”. It is fragmentary in order to represent memory’s shredded images – allowing a new, ironic voice: holding off pleasure, eucalyptus-scent of armpit and neck, the wild dry fringe that dipped over the mole on your brow; the furrows there I’d yet to understand. The lines end where the poem is torn away from memory, blazon of air, itself a phantom body. Again, this quality of voice – in which the self is othered or split – tends to appear where Ryan addresses the present rather than the past. A self-aware streak can help to offset the sentimental belief in permanence and preservation that elegiac and eulogistic modes inherently promote. Yet it’s rare in Unearthed. Unfortunately, a sense of irony or reflexiveness appears to me in only a handful of poems in this collection: striking lyrics about illusory moments, like “Fox Absence” and “Reflection”; and witty studies of materiality, as in “Food Ode”, “The Pawned Wedding Ring” and “Pictures, as Promised”, in which voiceless objects absorb metaphysical purpose. By contrast, the first half of the book comprises a section, “Karlsruhe”, which narrates Ryan’s emotional and psychological movement from one partner to another. Its monotony of voice and deeply personal address to specific, absent figures is problematic for this reader’s engagement. For example, a sequence, “The Sleeper”, wavers between describing what is out of reach – the dead lover – and simply gathering private allusions: 1 Liebestod Wraith-man, Toggeli, coming to wake me from life into dream, dragging, soothing, You are my wife and so I was, but the dream-you has forgotten the twenty years that followed: decrees nisi and absolute, remarriage and two children. Mephistophelean, you come to make your claim, and come again and each time, for the dream’s duration, Sandman, I accept the bargain, This is where you belong, am lulled, see them receding, my little family, love you only, how could I not remember, of course, walking death-wish, O much-older but none-the-wiser, first stakeholder, first foot in the door before the wicked fairy’s prick came into the picture, and we know where it went from there.

As Maria Takolander has noted, Unearthed brings to mind the deliberate if somewhat prosaic elegies of Ted Hughes’ Birthday Letters. Ryan’s considerable skill with rhythm and internal rhyme creates a kind of balladry: a self-elegising, whereby the poet makes myth from her life, remembering the present as though it were the future, and setting it into sequence with the past. If a public biography is what saves Hughes’ uncharacteristic self-obsession in that book, however, Ryan may be unable to rely upon such interest from her reader. In Unearthed, her poetic eye remains fixed on its subjects, searching for metaphors that will inscribe and set the image. The risk of this fastidious style is myopia: for the most part Unearthed is a collection that, for all its elegising of other people, remains so close to the single, subjective persona of its author that neither poet nor reader can escape the limits of “I” and “you”. At its nadir, this mode can become tiresome: poems like “The Homecoming” see Ryan exhaustively drawing upon a store of memory. Correspondingly, the formal control evident in The argument seems to dissolve from this collection: a more static view of the self and others is echoed in the book’s second half by the mannered structure of a sestina, “Vertigo”; and a sequence, “Doubles”, which finds its mark as a lyric essay but lacks snags and edges in terms of linguistic adventure. Revealingly, perhaps, it is Ryan’s translation of Rilke, “Requiem for a Woman Friend” – the final poem in Unearthed – that combines her rhythmic talent with a sharper sense of phrasing and a dramatic tone, creating a more interesting progression from the paratactic poems in The argument than many of the set pieces in this book. With such poetic muses alive in her work, Ryan’s next collection may open up fresher lyric ground.