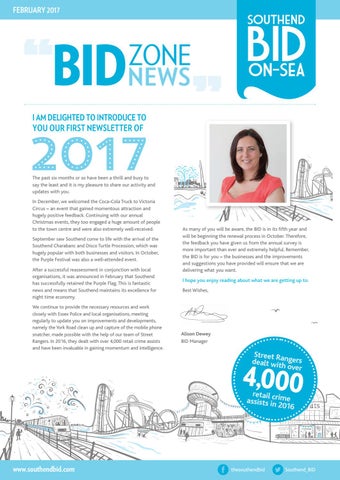 I AM DELIGHTED TO INTRODUCE TO YOU OUR FIRST NEWSLETTER OF

The past six months or so have been a thrill and busy to say the least and it is my pleasure to share our activity and updates with you. In December, we welcomed the Coca-Cola Truck to Victoria Circus â&amp;#x20AC;&amp;#x201C; an event that gained momentous attraction and hugely positive feedback. Continuing with our annual Christmas events, they too engaged a huge amount of people to the town centre and were also extremely well-received. September saw Southend come to life with the arrival of the Southend Charabanc and Disco Turtle Procession, which was hugely popular with both businesses and visitors. In October, the Purple Festival was also a well-attended event. After a successful reassessment in conjunction with local organisations, it was announced in February that Southend has successfully retained the Purple Flag. This is fantastic news and means that Southend maintains its excellence for night time economy. We continue to provide the necessary resources and work closely with Essex Police and local organisations, meeting regularly to update you on improvements and developments, namely the York Road clean up and capture of the mobile phone snatcher, made possible with the help of our team of Street Rangers. In 2016, they dealt with over 4,000 retail crime assists and have been invaluable in gaining momentum and intelligence.

As many of you will be aware, the BID is in its fifth year and will be beginning the renewal process in October. Therefore, the feedback you have given us from the annual survey is more important than ever and extremely helpful. Remember, the BID is for you â&amp;#x20AC;&amp;#x201C; the businesses and the improvements and suggestions you have provided will ensure that we are delivering what you want. I hope you enjoy reading about what we are getting up to. Best Wishes,

In November, we commissioned local artist, Charlotte Wright, to create a piece of artwork for the vacant boarded BHS shop front in order to brighten the town centre and portray a positive message to visitors and residents alike. It was very well-received, featuring in local press and magazines and brought a much needed touch of vibrancy to the lower part of the High Street. We have further plans for other parts, including Elmer Approach stay tuned for more visual improvements to Southend this year!

As a result of the Christmas Lights Switch On event taking place, footfall was higher. In turn, numerous businesses noted a larger amount of takings and an increase compared with last year’s event. A certain retailer noted a 55% increase in profit, another establishment recorded a year on year rise of 30% and others remarked that takings were consistently high throughout the day’s trading. The visit of the Coca-Cola truck to the High Street was a huge success, not only bringing in more town centre presence, but increasing footfall and sales by many – up 26% for a particular retailer. We received a large

amount of positive feedback, as collected by our Street Rangers, who were informed by many that both working hours and staff members were increased as shops were so busy! Takings were higher than that of a usual working day, compared with last year’s event or any other event that has taken place, with many new customers encouraged to visit their shop. It was an excellent day’s trading, which is fantastic news for the town.

UPCOMING EVENTS There are numerous events planned for the coming warmer months leading into the summer. These include the Two Wheels Festival in April, Outdoor Cinema and Film Festival in May and Adventure Islands’ dedicated events, including Easter Weekends in April, Fairytale Weekend in May and Superhero Weekend in July.

From our Annual Survey results, we know that our Street Rangers are of the most value to you, with many of those who did comment stating that they would like a greater Street Ranger presence. In response to this, we are delighted to welcome the addition of a fourth Street Ranger, Andrew Payne. Andrew has a background in security and thus an existing knowledge of the area and local individuals. We wish him the best of luck in his new role! Andrew Payne

Visit Southend Guides Visit Southend’s step-by-step guide means that it is now easier than ever to promote and add your business and its events and offers to the website – for free. The simple guide has been sent to you via email and post and can also be found on the news and events section of Southend BID’s website.

THANK YOU TO EVERYONE INVOLVED IN CREATING YET ANOTHER EXTRAORDINARY EVENT!

SURVEY Many thanks to those who took part in the Southend BID Annual Survey in December. Receiving 227 responses from the 378 levy payers it was sent to, the response rate was 60% - a fantastic turn out. The feedback and suggestions gained are extremely valuable and not only helpful in planning and preparation for the next financial year, but crucial as we progress into the renewal stage.

Here is a list of just some of the additions to delivery based on your feedback:

including increasing the number of pick up points

THE LON PLEASU GEST RE PIER IN THE WORLD

of respondents find visitor maps and guides are an essential service

10. Continued support of both Seafront firework displays and

We will provide more information on projects and changes at the beginning of the new financial year in April 2017.

of y Rangeou value t all So rs and th he Street uthe ink t they and BID’s sehat, of rv re impo of most ices, rtanc e

The lon gest pl easure the wo rld, str pier in et into th e Tham ching 1.3 mile offerin g es s all year amazing 360 Estuary an d round. degree once sa Sir John views id that Be tjem Southe “the Pi er is So an nd is th uthend e Pier.” ,

4. A higher number of events 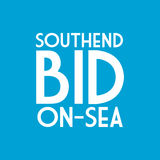