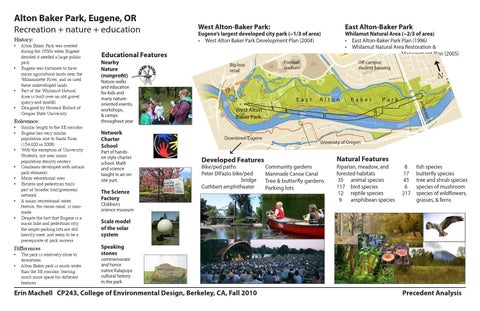 • Similar length to the SE corridor • Eugene has very similar population size to Santa Rosa (154,620 in 2008) • With the exception of University Students, not near major population density centers • Combines developed with natural park elements • Major educational uses • Bicycle and pedestrian trails part of broader trail/greenway network • A major recreational water feature, the canoe canal, is manmade • Despite the fact that Eugene is a major bike and pedestrian city, the ample parking lots are still heavily used, and seem to be a prerequisite of park success

• The park is relatively close to downtwon • Alton Baker park is much wider than the SE corridor, leaving much more space for different features.

Nature walks and education for kids and many natureoriented events, workshops, &amp; camps throughout year

• Alton Baker Park was created during the 1950s when Eugene decided it needed a large public park. • Eugene was fortunate to have major agricultural lands near the Willammette River, and so used these undeveloped lands • Part of the Whilamut Natural Area is built over an old gravel quarry and landfill • Designed by Howard Buford of Oregon State University

commemorate and honor native Kalapuya cultural history in the park 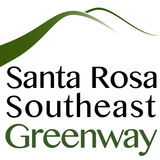