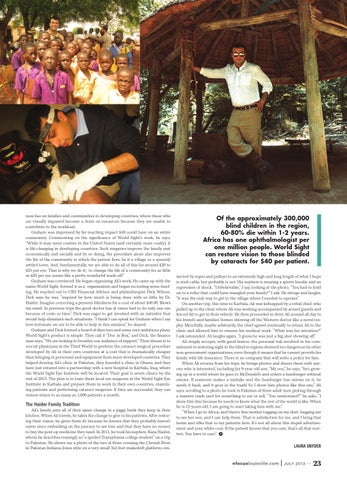 ness has on families and communities in developing countries, where those who are visually impaired become a drain on resources because they are unable to contribute to the workload. Graham was impressed by far-reaching impact $40 could have on an entire community. Commenting on the significance of World Sight’s work, he says, “While it may seem routine in the United States (and certainly more costly), it is life-changing in developing countries. Such surgeries improve the family unit economically and socially and by so doing, the procedure alone also improves the life of the community in which the person lives, be it a village or a sparsely settled town. And, fundamentally, we are able to do all of this for around $20 to $25 per eye. That is why we do it: to change the life of a community for as little as $20 per eye seems like a pretty wonderful trade-off.” Graham was convinced. He began organizing Ali’s work. He came up with the name World Sight, formed it as a organization and began recruiting some funding. He reached out to UBS Financial Advisor and philanthropist Dick Wilson. Dick says he was “inspired by how much is being done with so little by Dr. Haider. Imagine correcting a person’s blindness for a cost of about $40.00. Blows my mind. In previous trips the good doctor has at times had to do only one eye because of costs or time.” Dick was eager to get involved with an initiative that would help eliminate such situations. “I think I can speak for Graham when I say how fortunate we are to be able to help in this mission,” he shared. Graham and Dick formed a board of directors and some very ambitious plans. World Sight’s product is simple. They call it “Doc in Box,” and Dick, the finance man says, “We are looking to broaden our audience of support.” Their dream is to recruit physicians in the Third World to perform the cataract surgical procedure developed by Ali in their own countries at a cost that is dramatically cheaper than bringing in personnel and equipment from more developed countries. They helped develop Ali’s clinic in Pakistan, they founded a clinic in Ghana, and they have just entered into a partnership with a new hospital in Karbala, Iraq, where the World Sight Eye Institute will be located. Their goal is seven clinics by the end of 2013. The plan is to train these local eye surgeons at the World Sight Eye Institute in Karbala and prepare them to work in their own countries, examining patients and performing cataract surgeries. If they are successful, they can restore vision to as many as 1,000 patients a month.

The Haider Family Tradition Ali’s family puts all of their spare change in a piggy bank they keep in their kitchen. When Ali travels, he takes the change to give to his patients. After restoring their vision, he gives them $5 because he knows that they probably haven’t eaten since embarking on the journey to see him and that they have no money to buy the post-op medicine they need. In 2011, he took his nephew, Raza Haider, whom he describes teasingly as “a spoiled Transylvania college student” on a trip to Pakistan. He shows me a photo of the two of them crossing the Chenab River in Pakistan Indiana-Jones style on a very small 3x2 foot makeshift platform con-

Of the approximately 300,000 blind children in the region, 60-80% die within 1-2 years. Africa has one ophthalmologist per one million people. World Sight can restore vision to those blinded by cataracts for $40 per patient. nected by ropes and pulleys to an extremely high and long length of what I hope is steel cable, but probably is not. His nephew is wearing a sporty hoodie and an expression of shock. “Unbelievable,” I say, looking at the photo. “You had to hold on to a roller that could have mangled your hands?” I ask. He shrugs and laughs, “It was the only way to get to the village where I needed to operate.” On another trip, this time to Karbala, Ali was kidnapped by a tribal chief, who pulled up to the clinic where Ali was working accompanied by armed guards and forced Ali to get in their vehicle. He then proceeded to drive Ali around all day to his friend’s and families’ homes showing off the Western doctor like a novel trophy. Mercifully, maybe arbitrarily, the chief agreed eventually to return Ali to the clinic and allowed him to resume his medical work. “What was his intention?” I ask astounded. Ali laughs again, “I guess he was just a big shot showing off.” Ali simply accepts, with good humor, the personal risk involved in his commitment to restoring sight to the blind in regions deemed too dangerous by other non-government organizations, even though it means that he cannot provide his family with life insurance. There is no company that will write a policy for him. When Ali returns from his trips, he brings photos and shares them with anyone who is interested, including his 9-year-old son. “My son,” he says, “he’s growing up in a world where he goes to McDonald’s and orders a hamburger without onions. If someone makes a mistake and the hamburger has onions on it, he sends it back, and it goes in the trash! So I show him photos like this one,” Ali says, scrolling to a photo he took in Pakistan of three adult men picking through a massive trash yard for something to eat or sell. “You understand?” he asks. “I show him this because he needs to know what the rest of the world is like. When he is 12-years-old, I am going to start taking him with me.” “When I go to Africa, and there’s this mother tugging on my shirt, begging me to see her son, and I can help them. That is satisfaction for me, and I bring that home and offer that to my patients here. It’s not all about this stupid advertisement and your white coat. If the patient knows that you care, that’s all that matters. You have to care.” Laura Snyder 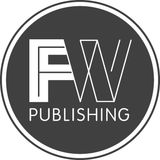