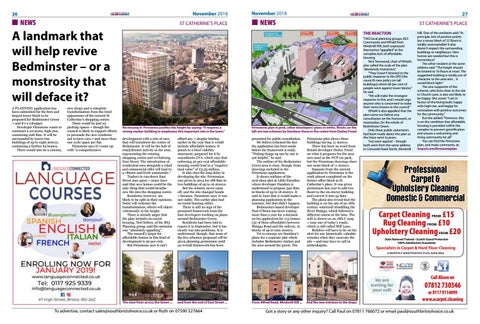 A landmark that will help revive Bedminster – or a monstrosity that will deface it? A PLANNING application has been submitted for the first and largest tower block to be proposed for Bedminster Green – and it’s a whopper. Developer Firmstone wants to construct a 22-storey high-rise, containing 208 flats. It will be surrounded by lower-rise buildings of up to eight storeys, containing a further 63 homes. There would also be a cinema,

new shops and a complete transformation from the tired appearance of the current St Catherine’s shopping centre. There would be just 25 parking spaces – though the council is likely to support efforts to persuade the new residents not to have cars – and more than one cycle space per flat. Firmstone says it’s come up with “a comprehensive

No missing it: Firmstone justifies the height by saying: “It requires a strong marker building to emphasise this important role in the town.”

Firmstone plan in pink, other developers’ plans in white. Blocks on the left are two schemes by Dandara; those in the centre from Deeley Freed

development with a mix of uses that will transform the centre of Bedminster. It will be the hub of retail/leisure activity in the area, regenerating the existing shopping centre and revitalising East Street. The introduction of residential uses alongside a retail and commercial offer will lead to a vibrant and lively community.” Traders in run-down East Street may agree – many have said that new homes could be the only thing that would breathe new life into the shopping centre. Residents, however, are likely to be split in their opinions. Some will welcome the transformation; others will object vehemently to the height. There is already anger that the plan includes no social housing. Neil Sellers, of the BS3 Planning group, said the omission was “absolutely appalling”. The council’s target for affordable homes in this kind of development is 30 per cent. But Firmstone says it can’t

presented for public consultation. Mr Sellers criticised the fact the application has been made before the framework is ready. “Picking things up one by one is not helpful,” he said. The outline of the Bedminster Green area is clear, though, from drawings included in the Firmstone application. It shows outlines of the next-door plot at Little Paradise, where developer Dandara is understood to propose 340 flats in blocks of up to 18 storeys. It said in June that it would make a planning application in the summer, but that didn’t happen. Bedminster-based developer Paul O’Brien has been waiting more than a year for a decision on his application for 215 homes (32 of them affordable) between Malago Road and the railway, in blocks of up to nine storeys. Yet to emerge are Dandara’s plans for a separate plot which includes Bedminster station and the area around the green. The

afford any – despite hinting earlier in the year that it would include affordable homes. It points to a brief viability statement, prepared for it by consultants GVA, which says that enforcing 30 per cent affordable housing would lead to a “negative land value” of £3.93 million. It also cites the long delay in developing the site. Permission was given in 2014 for 188 flats in two buildings of up to 16 storeys. But the scheme never came off, and the site changed hands – because, Firmstone says, it was not viable. The earlier plan had no social housing either. There is still no sign of the promised framework from the four developers working on plans around Bedminster Green. Residents had been told to expect it in September, but it has clearly run into problems. It is understood, though, that none of the five schemes proposed will be given planning permission until an overall framework has been

Firmstone plan shows these buildings having 12 storeys. There has been no word from Bristol developer Deeley Freed on what it proposes for the area now used as the NCP car park, but the Firmstone drawings show one main block of 11 storeys. Separate from the current application by Firmstone is the work almost completed on the former office block at St Catherine’s place. It was given permission last year to add two floors to the six-storey building and convert it into 54 flats. The plans also reveal that the building is on the site of an 18th century watermill straddling the River Malago, which followed a different course at the time. The mill is shown on an 18th C map – near one of today’s roads, which is still called Mill Lane. Builders will have to be on the alert for any historically valuable remains when they excavate the site – and may have to call in archeologists.

TWO local planning groups, BS3 Community and WHaM from Windmill Hill, both expressed themselves “appalled” at the complete lack of affordable housing. Nick Townsend, chair of WHaM, also called the scale of the plan “absolutely monstrous”. “They haven’t listened to the public response to the SPD [the council’s new policy on tall buildings] where 80 per cent of people were against tower blocks,” he said. “We will make the strongest response to this, and I would urge anyone who is concerned to make their views known to the council.” WHaM is also appalled that the plan came out before any consultation on the framework, or masterplan, for the whole of Bedminster Green. Only three public statements had been made about the plan as the Voice went to press. Two were against – though both were from the same address in Cotswold Road North, Windmill

ST CATHERINE’S PLACE Hill. One of the residents said: “In principle, lots of positive points but a tower block of 22 floors is totally unacceptable! It also doesn’t respect the surrounding buildings or neighbours. New homes are needed but this is horrendous.” The other resident at the same address said: “The height should be limited to 10 floors at most. The suggested building is totally out of character to the area and ... it would block light.” The one supporter of the scheme, who lives close to the site in Church Lane, is also not likely to be happy. She wrote: “I am in favour of this being built, happy with high-rise, and happy for renovation with positive outcomes for the community.” But she added: “However, this is on the condition that affordable housing is provided within the complex to prevent gentrification and ensure a welcoming and living community for all.” You can find the Firmstone plan, and make comments, at: tinyurl.com/firmstoneplan

The view from across the Green ...

and from the end of East Street ...

And the new entrance to the shops