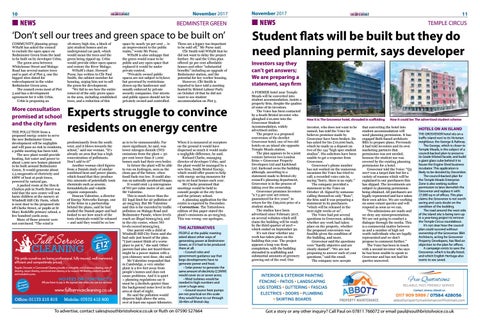 ‘Don’t sell our trees and green space to be built on’ COMMUNITY planning group WHaM has asked the council to exclude the open space on Bedminster Green from the land to be built on by developer Urbis. The green area between Whitehouse Street and Malago Road has several mature trees and is part of of Plot 5, one the biggest sites slated for redevelopment in the wider Bedminster Green area. The council owns most of Plot 5 and has a development agreement for it with Urbis. Urbis is proposing an

18-storey high rise, a block of 300 student homes and an underground car park, which would mean the trees and the green being ripped up. Urbis would provide other open spaces and restore the River Malago. WHaM’s chair, Howard Purse, has written to Cllr Paul Smith, the cabinet member for housing, urging him not to sell the green for development. “We fail to see how the entire removal of the only green space in the area, including established trees, and a reduction of this

More consultation promised at school and the city farm

THE POLLUTION from a proposed energy centre to serve the new Bedminster Green development will be negligible and will pose no risk to residents, a public meeting has been told. The new plant would provide heating, hot water and power to about 1,000 new homes planned to be built around Bedminster Green. It would generate about 2.5 megawatts of electricity and 6MW of heat at peak times, powered by natural gas. A packed room at the Hen & Chicken pub in North Street was told that the new centre will not harm children at the nursery at Windmill Hill City Farm, which is next door to the proposed site off Clarke Street, or pupils at St Mary Redcliffe primary school, a few hundred yards away. Many of those present were not convinced. “The wind is

predominantly from the south west, and it blows towards the school,” said one woman. “It’s already an area that has a high concentration of pollutants. Don’t add to it!” Another woman cited figures from a Danish study of similar combined heat and power plants, which found that they produce tiny amounts of potentially toxic chemicals such as arsenic, formaldehyde and volatile organic compounds. Duncan Valentine, a director of Energy Networks Europe, one of the firms in a partnership behind the plans, said he had studied the Danish paper and had looked to see how much of the toxic chemicals would be released – and said they would be so low

NO FEES OR CONTRACTS!

All you have to pay is the agreed rate when you use our services.

space by nearly 50 per cent … is an improvement to the public realm,” wrote Mr Purse. WHaM is also unhappy that the green would cease to be public and any open space that replaced it would be under private control. “Privately owned public spaces are not subject to bylaws but governed by restrictions drawn up the landowner and usually enforced by private security companies. Our streets and public spaces should not be privately owned and controlled.

as to to be unmeasurable. Far more significant, he said, was lower nitrogen dioxide (NO) emissions from the plant – 30 per cent lower than if 1,000 homes each had their own boiler. In future the plant will be able to run on hydrogen, seen as the clean gas of the future, when fossil fuels run low. It could also run on naturally-produced biogas. It would emit 1.9 micrograms of NO per cubic metre of air, said Mr Valentine. This is much lower than the EU legal limit for air pollution of 40 mcg/m3. But Mr Valentine said this is far exceeded by traffic pollution on Malago Road and Bedminster Parade, where levels reach an illegal 60mcg/m3, and in the city centre, where NO levels exceed 90mcg/m3. One parent with a child at Windmill Hill City Farm said she had only just heard of the plan. “I just cannot think of a worse place to put it,” she said. Other parents had also not heard there might be a power station with a 31m chimney next door, she said. Mr Valentine responded that in Cambridge, a very similar plant is a few feet away from people’s homes and does not cause problems. And it is quiet – planning regulations say it must be 5 decibels quieter than the background noise level in the area at dead of night. He said the pollution would disperse high above the area, over at least one square kilometre.

These are a legacy too important to be sold off,” Mr Purse said. Cllr Smith told WHaM that he did not want to delay the project further. He said the Urbis plan offered 30 per cent affordable homes and other “substantial benefits” including an upgrade of Bedminster station, and the potential for key worker housing. However, Cllr Smith is reported to have told a meeting hosted by Bristol Labour Party on October 18 that he did not want to see student accommodation on Plot 5.

When it is measured at receptors on the ground it would have dispersed so much it would make a negligible difference, he said. Richard Clarke, managing director of developer Urbis, said the plant would be managed by a new firm, South Bristol Energy, which would offer grants to help with energy saving measures for up to 20 local homes each year. Mr Clarke promised that meetings would be held to consult people at the city farm and the primary school. A planning application for the centre is expected by December. • Correction: The Totterdown edition of this paper stated the plant’s emissions as 40 mcg/m3. This was wrong: our apologies.

THE ALTERNATIVES PEOPLE at the public meeting asked about other ways of generating power at Bedminster Green, or if it had to be produced there at all. • Council rules and government guidance say that large developments have to generate power and heat; • Solar power to generate the same amount of electricity (2.5MW) would cover six or seven acres; • Wind turbines would be needed in high numbers and cover a huge area; • Ground source heat pumps are not practical on this scale: they would have to cut through 30-40m of Bristol clay.

Student flats will be built but they do need planning permit, says developer Investors say they can’t get answers; We are preparing a statement, says firm A FORMER hotel near Temple Meads will be converted into student accommodation, insists a property firm, despite the qualms of some of its investors. The Voice has been contacted by a South Bristol investor who ploughed £10,000 into the Grosvenor Student Accommodation, widely advertised online. The project is a proposed conversion of the derelict Grosvenor hotel, one of two old hotels on an island site opposite Temple Meads station. The plan appears to be a joint venture between two London firms – Grosvenor Property Developers Ltd and Earlcloud Ltd. Earlcoud owns the building although, according to a statement made to Bristol city council’s planning department, Grosvenor is in the process of taking over the ownership. Grosvenor promises investors “a 7.5 per cent net return guaranteed for five years” in return for the £99,000 price of a student studio. The studios have been advertised since February 2017, on several websites which still claim the building will be ready by the third quarter of 2017 – which ended on September 30. It’s not clear whether any work has taken place on the building this year. The project appears a long way from completion, with the building shrouded in scaffolding and substantial amounts of greenery growing out of the roof. One

How it is: The Grosvenor hotel, shrouded in scaffolding investor, who does not want to be named, has told the Voice he believes promises made by Grosvenor have been broken. He has asked for his £10,000 back, which he made as a deposit on two of the 144 “high spec student studios”. His solicitors have been unable to get a response from Grosvenor. Grosvenor’s phone number has not worked on the numerous occasions the Voice has tried to call; a recorded voice cuts in, saying “Sorry, there is no reply.” The company provided a statement to the Voice on October 18. Signed by someone calling themselves only “Russ”, the firm said it was preparing a statement to its purchasers “which will be released in the next eight weeks or so”. The Voice had put several questions to Grosvenor, asking whether any work had taken place on the property, whether the proposed conversion was feasible given the condition of the building, and more. Grosvenor said the questions were “hardly objective and are clearly slanted”. “We are not proposing to answer each of your questions,” said the email. The company now accepts

that converting the hotel into HOTELS ON AN ISLAND student accommodation will THE GROSVENOR hotel sits on a need planning permission. It has traffic island next to its Victorian engaged Bath-based architects neighbour, the George & Railway. BBA to prepare plans. Previously The George, which is closer to it had told investors and its own Temple Meads, is the subject of a marketing partners that council-backed plan to preserve permission was not needed, its Grade II-listed facade, and build because the student use was a giant glass cube behind it to covered by the existing planning house the Engine Shed business permission for a hotel. incubator. This application is Grosvenor told the Voice: “Q3 likely to be decided by December. 2017 was a target date but for a The council-backed plan for variety of reasons which will be the Temple Meads Enterprise explained to our purchasers this Zone is also seeking outline has slipped. The investments are permission to later demolish the subject to planning permission Grosvenor and replace it with being obtained. All purchasers are 27,000 sq m of offices. This plan legally represented and have taken claims the Grosvenor is not worth their own advice. We are working saving and casts doubt on the on some extant queries and will condition of the building. respond as soon as we can. The road around the west side “No admissions are made and of the island site is being torn up we deny any misrepresentation. in a year-long project to remove We are not going to conduct a the Temple Circus roundabout. dialogue through the media. This It’s not clear how the council is a commercial matter between plan could succeed without us and a number of high net ownership of the Grosvenor. BBA worth individuals who are legally Architects, acting for Grosvenor represented and we don’t PROPERTY MAINTENANCE Property Developers, has filed an propose to comment further.” objection to thePAINTING plan for offices. The Voice has been in touch INTERIOR & EXTERIOR A campaign exists to save the with a second investor who says FENCING • PATIOS • LANDSCAPING Grosvenor, which is locally listed, he has been unable to speak to which English• Heritage also LOGhis STORESand • GUTTERING FASCIAS Grosvenor and has not had wants to see saved. queries answered.

How it could be: The advertised student scheme

• PATIOS • LANDSCAPING Got a story or any other inquiry? CallFENCING Paul on 07811 766072 or email paul@southbristolvoice.co.uk