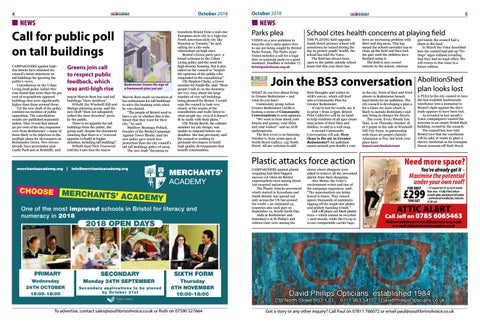 Call for public poll on tall buildings CAMPAIGNERS against highrise blocks have attacked the council’s latest statement on tall buildings for ignoring the public’s views. Consultation on the Urban Living draft policy earlier this year found that more than 80 per cent of respondents opposed buildings that were significantly higher than those around them. Yet the new draft of the policy contains no mention of public opposition. The consultation results are published separately online. They reveal that almost 40 per cent of the 665 responses were from Bedminster – many of them likely to be objectors to the multiple plans for skyscrapers on Bedminster Green. New towers already have permission near Castle Park and at Redcliffe, and

Greens join call to respect public feedback, which was anti-high rise mayor Marvin Rees has said tall buildings “show ambition”. WHaM, the Windmill Hill and Malago planning group, said the new draft “does not adequately reflect the clear direction” given by the public. There is no appetite for tall buildings from the public, the group said, despite the document claiming that there is a “renewed appetite to build at higher densities, including tall buildings”. WHaM chair Nick Townsend told the Voice that the mayor

Bedminster Green: No sign of a framework plan just yet Marvin Rees made no mention of his enthusiasm for tall buildings to solve the housing crisis when he was elected. “The people of Bristol need to have a say in whether this is the future that they want for their city,” he said. Matthew Montagu-Pollack, founder of the Bristol Campaign Against Tower Blocks, said the new policy gave much less protection than the city council’s old tall buildings policy of 2005. The new draft “threatens to

transform Bristol from a mid-rise European-style city to a high-rise North American-style city like Houston or Toronto,” he said, calling for a city-wide referendum on high rises. Bristol’s Green party gave a broad welcome to the Urban Living policy and the need for high-density housing. But it also called on the council to “respect the opinions of the public who responded to the consultation”. Cllr Stephen Clarke, a Green member for Southville, said: “Most people I talk to on the doorstep are very wary about the large number of very tall buildings being planned for Bristol. I would urge the council to look very closely at the results of the consultation and really listen to what people say, even if it doesn’t fit in easily with their plans.” Cllr Nicola Beech, the cabinet member for city design, was unable to respond before our deadline. She has previously said the council is working to persuade developers to build high quality developments that benefit communities.

VIEWS on a new ambition to keep the city’s open spaces free to use are being sought by Bristol Parks Forum. The Parks 2030 Vision includes a call for a legal duty to maintain parks to a good standard. Deadline is October 17. bristolparksforum.org.uk

THE PLAYING field opposite South Street primary school will sometimes be locked during the day to protect pupils’ health, the school has told the Voice. The field has always been open to the public outside school hours but this year there has

been an increasing problem with litter and dog mess. This has meant the school caretaker has to clean up the field and then lock the gate until the children have finished using it. The field is now owned entirely by the school, whereas

Join the BS3 conversation WHAT do you love about living in Greater Bedminster – and what do you hate? Community group Action Greater Bedminster (AGB) is hosting a series of Community Conversations to seek opinions. “We want to hear about your moans and groans, your ideas and your wishes!” said an AGB spokesperson. The first event is on Saturday October 6, from 10am-5pm at North Street Gallery, 135 North Street. All are welcome to add

their thoughts and wishes to AGB’s survey, which will feed into a Community Plan for Greater Bedminster. If you’re lost for words, say it in print – from 2-5pm, Bristol Print Collective will be on hand to help residents of all ages create mini prints of their likes and dislikes, to add to a wall map. A second Community Conversation will ask: How clean is the air in Greater Bedminster? Air pollution causes around 300 deaths a year

in the city. Parts of East and West streets in Bedminster breach legal limits for air pollution. The city council is developing a plan a for a Clean Air Zone which is likely to include Bedminster and may bring in charges for diesels. The event, Every Breath You Take, is on Thursday October 18 at 7.30pm in the café at Windmill Hill City Farm, in partnership with clean air project claircity. Admission is free, but book your place here: tinyurl.com/bedsairmeet

Secondary applications to be placed by October 31st

CAMPAIGNERS against plastic wrapping had their biggest success yet when six Bristol supermarkets were among about 100 targeted nationwide. The Plastic Attacks movement which started in Keynsham and South Bristol, has spread not only across the UK but around the world – an estimated 25 countries also took part on September 15, World Earth Day. Asda at Bedminster and Sainsbury’s at St Philip’s and Ashton Gate were among the

stores where shoppers were asked to remove all the unwanted plastic from their shopping. Alex Morss, the Voice’s environment writer and one of the campaign organisers, said: “The supermarkets are being forced to listen. They cannot ignore thousands of customers ripping off the single-use plastic and politely handing it back.” Lidl will phase out black plastic trays – which cannot be recycled – next month, while the Co-op is to use compostable carrier bags.

previously the council had a share in the land. In March the Voice described how the council had put up “No Dogs” signs without revealing that they had no legal effect. We will return to this issue in a future edition.

AbolitionShed plan looks lost A PLEA to the city council to turn the last available harbourside warehouse into a memorial to Bristol’s fight against the slave trade appears to have been lost. As revealed in last month’s Voice, campaigners wanted the museum in an empty Welsh Back building, owned by the council. The council has now told Bristol Live that the warehouse will be sold. It wants to place a slavery memorial in the Georgian House museum off Park Street.

Maximise the potential under your own roof!