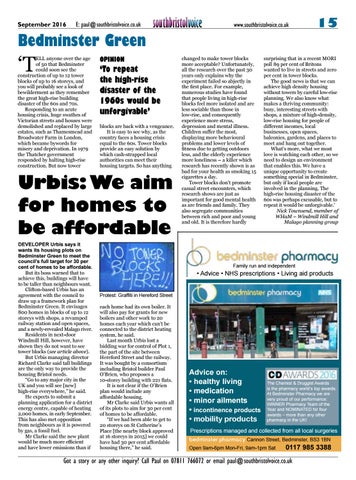 ELL anyone over the age of 50 that Bedminster could soon see the construction of up to 12 tower blocks of up to 16 storeys, and you will probably see a look of bewilderment as they remember the great high-rise building disaster of the 60s and 70s. Responding to an acute housing crisis, huge swathes of Victorian streets and houses were demolished and replaced by large estates, such as Thamesmead and Broadwater Farm in London, which became bywords for misery and deprivation. In 1979 the Thatcher government responded by halting high-rise construction. But now tower

‘To repeat the high-rise disaster of the 1960s would be unforgivable’ blocks are back with a vengeance. It is easy to see why, as the country faces a housing crisis equal to the 60s. Tower blocks provide an easy solution by which cash-strapped local authorities can meet their housing targets. So has anything

Urbis: We aim for homes to be affordable DEVELOPER Urbis says it wants its housing plots on Bedminster Green to meet the council’s full target for 30 per cent of homes to be affordable. But its boss warned that to achieve this, buildings will have to be taller than neighbours want. Clifton-based Urbis has an agreement with the council to draw up a framework plan for Bedminster Green. It envisages 800 homes in blocks of up to 12 storeys with shops, a revamped railway station and open spaces, and a newly-revealed Malago river. Residents in next-door Windmill Hill, however, have shown they do not want to see tower blocks (see article above). But Urbis managing director Richard Clarke said tall buildings are the only way to provide the housing Bristol needs. “Go to any major city in the UK and you will see [new] high-rise everywhere,” he said. He expects to submit a planning application for a district energy centre, capable of heating 2,000 homes, in early September. This has also met opposition from neighbours as it is powered by gas, a fossil fuel. Mr Clarke said the new plant would be much more efficient and have lower emissions than if

changed to make tower blocks more acceptable? Unfortunately, all the research over the past 30 years only explains why the experiment failed so abjectly in the first place. For example, numerous studies have found that people living in high-rise blocks feel more isolated and are less sociable than those in low-rise, and consequently experience more stress, depression and mental illness. Children suffer the most, displaying more behavioural problems and lower levels of fitness due to getting outdoors less, and the elderly experience more loneliness – a killer which research has recently shown is as bad for your health as smoking 15 cigarettes a day. Tower blocks don’t promote casual street encounters, which research shows are just as important for good mental health as are friends and family. They also segregate communities between rich and poor and young and old. It is therefore hardly

surprising that in a recent MORI poll 89 per cent of Britons wanted to live in streets and zero per cent in tower blocks. The good news is that we can achieve high density housing without towers by careful low-rise planning. We also know what makes a thriving community: busy, interesting streets with shops, a mixture of high-density, low-rise housing for people of different incomes, local businesses, open spaces, balconies, gardens, and places to meet and hang out together. What’s more, what we most love is watching each other, so we need to design an environment that enables this. We have a unique opportunity to create something special in Bedminster, but only if local people are involved in the planning. The high-rise housing disaster of the 60s was perhaps excusable, but to repeat it would be unforgivable.’ Nick Townsend, member of WHaM – Windmill Hill and Malago planning group

• Advice • NHS prescriptions • Living aid products Protest: Graffiti in Hereford Street each home had its own boiler. It will also pay for grants for new boilers and other work to 20 homes each year which can’t be connected to the district heating system, he said. Last month Urbis lost a bidding war for control of Plot 1, the part of the site between Hereford Street and the railway. It was bought by a consortium including Bristol builder Paul O’Brien, who proposes a 10-storey building with 221 flats. It is not clear if the O’Brien plan would include any affordable housing. Mr Clarke said Urbis wants all of its plots to aim for 30 per cent of homes to be affordable. “If we had been able to get to 20 storeys on St Catherine’s Place [the nearby block approved at 16 storeys in 2015] we could have had 30 per cent affordable housing there,” he said.

The Chemist & Druggist Awards is the pharmacy world’s top awards. At Bedminster Pharmacy we are very proud of our performance: WINNER Pharmacy Team of the Year and NOMINATED for four awards – more than any other pharmacy in the UK!