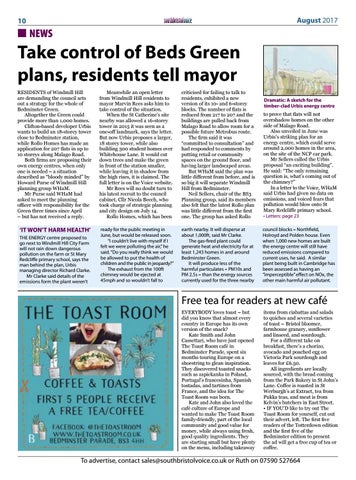 Take control of Beds Green plans, residents tell mayor RESIDENTS of Windmill Hill are demanding the council sets out a strategy for the whole of Bedminster Green. Altogether the Green could provide more than 1,000 homes. Clifton-based developer Urbis wants to build an 18-storey tower close to Bedminster station, while Rollo Homes has made an application for 207 flats in up to 10 storeys along Malago Road. Both firms are proposing their own energy centres, when only one is needed – a situation described as “bloody minded” by Howard Purse of Windmill Hill planning group WHaM. Mr Purse said WHaM had asked to meet the planning officer with responsibility for the Green three times since April – but has not received a reply.

Meanwhile an open letter from Windmill Hill residents to mayor Marvin Rees asks him to take control of the situation. When the St Catherine’s site nearby was allowed a 16-storey tower in 2015 it was seen as a one-off landmark, says the letter. But now Urbis proposes a larger, 18 storey tower, while also building 300 student homes over Whitehouse Lane. It would cut down trees and make the green in front of the station smaller, while leaving it in shadow from the high rises, it is claimed. The full letter is on the Voice website. Mr Rees will no doubt turn to his latest recruit to the council cabinet, Cllr Nicola Beech, who took charge of strategic planning and city design on July 14. Rollo Homes, which has been

criticised for failing to talk to residents, exhibited a new version of its 10- and 6-storey blocks. The number of flats is reduced from 217 to 207 and the buildings are pulled back from Malago Road to allow room for a possible future Metrobus route. The firm said it was “committed to consultation” and had responded to comments by putting retail or community spaces on the ground floor, and having larger landscaped areas. But WHaM said the plan was little different from before, and is so big it will separate Windmill Hill from Bedminster. Neil Sellers, chair of the BS3 Planning group, said its members also felt that the latest Rollo plan was little different from the first one. The group has asked Rollo

to prove that flats will not overshadow homes on the other side of Malago Road. Also unveiled in June was Urbis’s striking plan for an energy centre, which could serve around 2,000 homes in the area, on the site of the NCP car park. Mr Sellers called the Urbis proposal “an exciting building”. He said: “The only remaining question is, what’s coming out of the chimney?” In a letter to the Voice, WHaM said Urbis had given no data on emissions, and voiced fears that pollution would blow onto St Mary Redcliffe primary school. • Letters: page 23

ready for the public meeting in June, but would be released soon. “I couldn’t live with myself if I felt we were polluting the air,” he said. “Do you really think we would be allowed to put the health of children and the public in jeopardy?” The exhaust from the 100ft chimney would be ejected at 45mph and so wouldn’t fall to

earth nearby. It will disperse at about 1,000ft, said Mr Clarke. The gas-fired plant could generate heat and electricity for at least 1,243 homes in and around Bedminster Green. It will produce less of the harmful particulates – PM10s and PM 2.5s – than the energy sources currently used for the three nearby

council blocks – Northfield, Holroyd and Polden house. Even when 1,000 new homes are built the energy centre will still have reduced emissions compared to current uses, he said. A similar plant being built in Cambridge has been assessed as having an “imperceptible” effect on NOx, the other main harmful air pollutant.

THE ENERGY centre proposed to go next to Windmill Hill City Farm will not rain down dangerous pollution on the farm or St Mary Redcliffe primary school, says the man behind the plan, Urbis managing director Richard Clarke. Mr Clarke said details of the emissions form the plant weren’t

Dramatic: A sketch for the timber-clad Urbis energy centre

Free tea for readers at new café EVERYBODY loves toast – but did you know that almost every country in Europe has its own version of the snack? Kate Smith and John Cassettari, who have just opened The Toast Room café in Bedminster Parade, spent six months touring Europe on a shoestring to glean inspiration. They discovered toasted snacks such as zapiekanka in Poland, Portugal’s francesinha, Spanish tostadas, and tartines from France, and the idea for The Toast Room was born. Kate and John also loved the café culture of Europe and wanted to make The Toast Room family-friendly, part of the local community and good value for money, while always using fresh, good quality ingredients. They are starting small but have plenty on the menu, including takeaway

items from ciabattas and salads to quiches and several varieties of toast – Bristol bloomer, farmhouse granary, sunflower and linseed, and sourdough. For a different take on breakfast, there’s a chorizo, avocado and poached egg on Victoria Park sourdough and leaves for £6.50. All ingredients are locally sourced, with the bread coming from the Park Bakery in St John’s Lane. Coffee is roasted in St Werburgh’s at Extract, tea from Pukka teas, and meat is from Kelvin’s butchers in East Street. • IF YOU’D like to try out The Toast Room for yourself, cut out their advert, left. The first five readers of the Totterdown edition and the first five of the Bedminster edition to present the ad will get a free cup of tea or coffee.