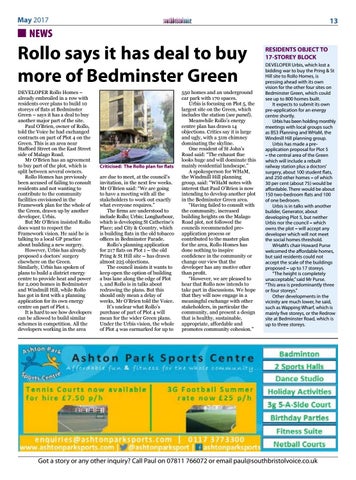 Rollo says it has deal to buy more of Bedminster Green DEVELOPER Rollo Homes – already embroiled in a row with residents over plans to build 10 storeys of flats at Bedminster Green – says it has a deal to buy another major part of the site. Paul O’Brien, owner of Rollo, told the Voice he had exchanged contracts on part of Plot 4 on the Green. This is an area near Stafford Street on the East Street side of Malago Road. Mr O’Brien has an agreement to buy part of the plot, which is split between several owners. Rollo Homes has previously been accused of failing to consult residents and not wanting to contribute to the community facilities envisioned in the Framework plan for the whole of the Green, drawn up by another developer, Urbis. But Mr O’Brien insisted Rollo does want to respect the Framework vision. He said he is talking to a local GP practice about building a new surgery. However, Urbis has already proposed a doctors’ surgery elsewhere on the Green. Similarly, Urbis has spoken of plans to build a district energy centre to provide heat and power for 2,000 homes in Bedminster and Windmill Hill, while Rollo has got in first with a planning application for its own energy centre on part of Plot 1. It is hard to see how developers can be allowed to build similar schemes in competition. All the developers working in the area

Criticised: The Rollo plan for flats are due to meet, at the council’s invitation, in the next few weeks. Mr O’Brien said: “We are going to have a meeting with all the stakeholders to work out exactly what everyone requires.” The firms are understood to include Rollo; Urbis; Longharbour, which is developing St Catherine’s Place; and City & Country, which is building flats in the old tobacco offices in Bedminster Parade. Rollo’s planning application for 217 flats on Plot 1 – the old Pring & St Hill site – has drawn almost 225 objections. The council insists it wants to keep open the option of building a bus lane along the edge of Plot 1, and Rollo is in talks about redrawing the plans. But this should only mean a delay of weeks, Mr O’Brien told the Voice. It’s unclear what Rollo’s purchase of part of Plot 4 will mean for the wider Green plans. Under the Urbis vision, the whole of Plot 4 was earmarked for up to

550 homes and an underground car park with 170 spaces. Urbis is focusing on Plot 5, the largest site on the Green, which includes the station (see panel). Meanwhile Rollo’s energy centre plan has drawn 14 objections. Critics say it is large and ugly, with a 31m chimney dominating the skyline. One resident of St John’s Road said: “The exhaust flue looks huge and will dominate this mainly residential landscape.” A spokesperson for WHaM, the Windmill Hill planning group, said: “WHaM notes with interest that Paul O’Brien is now intending to develop another plot in the Bedminster Green area. “Having failed to consult with the community, increased building heights on the Malago Road plot, not followed the councils recommended preapplication process or contributed to the master plan for the area, Rollo Homes has done nothing to inspire confidence in the community or change our view that the developer has any motive other than profit. “However, we are pleased to hear that Rollo now intends to take part in discussions. We hope that they will now engage in a meaningful exchange with other stakeholders, in particular the community, and present a design that is healthy, sustainable, appropriate, affordable and promotes community cohesion.”

RESIDENTS OBJECT TO 17-STOREY BLOCK DEVELOPER Urbis, which lost a bidding war to buy the Pring & St Hill site to Rollo Homes, is pressing ahead with its own vision for the other four sites on Bedminster Green, which could see up to 800 homes built. It expects to submit its own pre-application for an energy centre shortly. Urbis has been holding monthly meetings with local groups such as BS3 Planning and WHaM, the Windmill Hill planning group. Urbis has made a preapplication proposal for Plot 5 – the central area of the Green which will include a rebuilt railway station plus a doctors’ surgery, about 100 student flats, and 250 other homes – of which 30 per cent (about 75) would be affordable. There would be about 150 two-bedroom flats and 100 of one bedroom. Urbis is in talks with another builder, Generator, about developing Plot 5, but neither Urbis nor the council – which owns the plot – will accept any developer which will not meet the social homes threshold. WHaM’s chair Howard Purse welcomed the affordable homes, but said residents could not accept the scale of the buildings proposed – up to 17 storeys. “The height is completely unacceptable,” said Mr Purse. “This area is predominantly three or four storeys.” Other developments in the vicinity are much lower, he said, such as Wapping Wharf, which is mainly five storeys, or the Redrow site at Bedminster Road, which is up to three storeys.