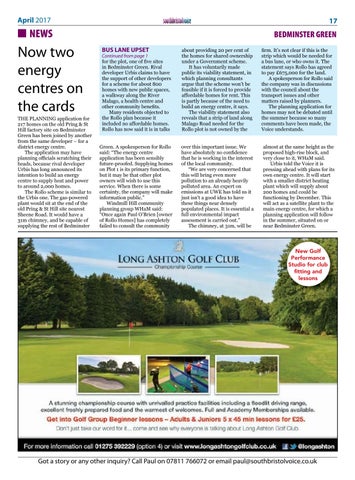 Now two energy centres on the cards THE PLANNING application for 217 homes on the old Pring & St Hill factory site on Bedminster Green has been joined by another from the same developer – for a district energy centre. The application may have planning officials scratching their heads, because rival developer Urbis has long announced its intention to build an energy centre to supply heat and power to around 2,000 homes. The Rollo scheme is similar to the Urbis one. The gas-powered plant would sit at the end of the old Pring & St Hill site nearest Sheene Road. It would have a 31m chimney, and be capable of supplying the rest of Bedminster

Continued from page 1 for the plot, one of five sites in Bedminster Green. Rival developer Urbis claims to have the support of other developers for a scheme for about 800 homes with new public spaces, a walkway along the River Malago, a health centre and other community benefits. Many residents objected to the Rollo plan because it included no affordable homes. Rollo has now said it is in talks

about providing 20 per cent of the homes for shared ownership under a Government scheme. It has voluntarily made public its viability statement, in which planning consultants argue that the scheme won’t be feasible if it is forced to provide affordable homes for rent. This is partly because of the need to build an energy centre, it says. The viability statement also reveals that a strip of land along Malago Road needed for the Rollo plot is not owned by the

Green. A spokesperson for Rollo said: “The energy centre application has been sensibly future-proofed. Supplying homes on Plot 1 is its primary function, but it may be that other plot owners will wish to use this service. When there is some certainty, the company will make information public.” Windmill Hill community planning group WHaM said: “Once again Paul O’Brien [owner of Rollo Homes] has completely failed to consult the community

over this important issue. We have absolutely no confidence that he is working in the interest of the local community. “We are very concerned that this will bring even more pollution to an already heavily polluted area. An expert on emissions at UWE has told us it just isn’t a good idea to have these things near densely populated places. It is essential a full environmental impact assessment is carried out.” The chimney, at 31m, will be

BEDMINSTER GREEN firm. It’s not clear if this is the strip which would be needed for a bus lane, or who owns it. The statement says Rollo has agreed to pay £675,000 for the land. A spokesperson for Rollo said the company was in discussions with the council about the transport issues and other matters raised by planners. The planning application for homes may not be debated until the summer because so many comments have been made, the Voice understands. almost at the same height as the proposed high-rise block, and very close to it, WHaM said. Urbis told the Voice it is pressing ahead with plans for its own energy centre. It will start with a smaller district heating plant which will supply about 200 homes and could be functioning by December. This will act as a satellite plant to the main energy centre, for which a planning application will follow in the summer, situated on or near Bedminster Green.