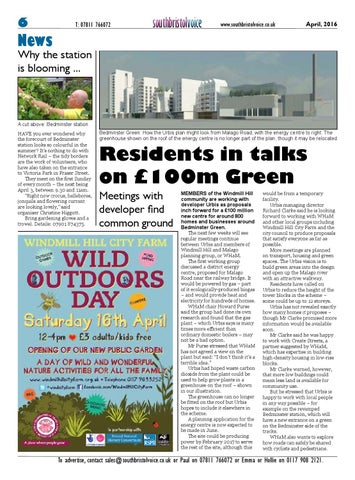 Why the station is blooming ...

A cut above: Bedminster station HAVE you ever wondered why the forecourt of Bedminster station looks so colourful in the summer? It’s nothing to do with Network Rail – the tidy borders are the work of volunteers, who have also taken on the entrance to Victoria Park in Fraser Street. They meet on the first Sunday of every month – the next being April 3, between 9.30 and 11am. “Right now crocus, hellebores, jonquils and flowering currant are looking lovely,” said organiser Christine Higgott. Bring gardening gloves and a trowel. Details: 07901 874375.

Bedminster Green: How the Urbis plan might look from Malago Road, with the energy ce ntre to right. The greenhouse shown on the roof of the energy centre is no longer part of the plan, though it may be relocated

Residents in talks on £100m Green

MEMBERS of the Windmill Hill community are working with developer Urbis as proposals inch forward for a £100 million new centre for around 800 homes and businesses around Bedminster Green. The next few weeks will see regular meetings continue between Urbis and members of Windmill Hill and Malago planning group, or WHaM. The first working group discussed a district energy centre, proposed for Malago Road near the railway bridge. It would be powered by gas – part of it ecologically-produced biogas – and would provide heat and electricity for hundreds of homes. WHaM chair Howard Purse said the group had done its own research and found that the gas plant – which Urbis says is many times more efficient than ordinary domestic boilers – may not be a bad option. Mr Purse stressed that WHaM has not agreed a view on the plant but said: “I don’t think it’s a terrible idea.” Urbis had hoped waste carbon dioxide from the plant could be used to help grow plants in a greenhouse on the roof – shown in our illustration. The greenhouse can no longer be fitted on the roof but Urbis hopes to include it elsewhere in the scheme. A planning application for the energy centre is now expected to be made in June. The site could be producing power by February 2017 to serve the rest of the site, although this

would be from a temporary facility. Urbis managing director Richard Clarke said he is looking forward to working with WHaM and other local groups including Windmill Hill City Farm and the city council to produce proposals that satisfy everyone as far as possible. More meetings are planned on transport, housing and green spaces. The Urbis vision is to build green areas into the design and open up the Malago river with an attractive walkway. Residents have called on Urbis to reduce the height of the tower blocks in the scheme – some could be up to 12 storeys. Urbis has not revealed exactly how many homes it proposes – though Mr Clarke promised more information would be available soon. Mr Clarke said he was happy to work with Create Streets, a partner suggested by WHaM, which has expertise in building high-density housing in low-rise blocks. Mr Clarke warned, however, that more low buildings could mean less land is available for community use. But he stressed that Urbis is happy to work with local people in any way possible – for example on the revamped Bedminster station, which will have a new entrance on a green on the Bedminster side of the tracks. WHaM also wants to explore how roads can safely be shared with cyclists and pedestrians.