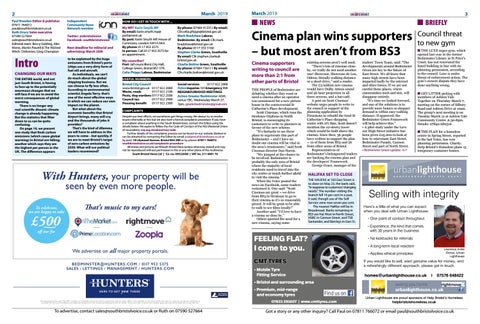 Intro CHANGING OUR WAYS THE ENTIRE world, and not just South Bristol, is having to face up to the potentially enormous changes that we will face if we are to avoid the worst consequences of global warming. There is no longer any real scientific dissent: climate change is already happening. But the statistics that filter down to us can be quite confusing. On page 10, we present one study that finds carbon emissions (which cause global warming) in Bristol are falling; another which says they are the highest per person in the UK. The difference appears

Independent Community News Network member Twitter: @sbristolvoice Facebook: southbristolvoice Next deadline for editorial and advertising: March 20th to be explained by the huge emissions from Bristol’s ports (ships use a very dirty form of fuel oil) and aircraft. As individuals, we can’t do much about the global shipping business. But we can choose to fly less often. According to environmental scientist Angela Terry, that’s one of the most effective ways in which we can reduce our own impact on the planet. But what about the economic benefits that Bristol Airport brings, many will cry, and the thousands of jobs it provides? That’s the kind of dilemma we will have to address in the years to come – but quickly, if we are to meet Bristol’s target of zero carbon emissions by 2030. What will our political leaders recommend?

COMPLAINTS Despite our best efforts, we sometimes get things wrong. We always try to resolve issues informally at first but we also have a formal complaints procedure. If you have a complaint about anything in the South Bristol Voice, contact the Editor using the details below. We aspire to follow the the Code of Conduct of the NUJ (National Union of Journalists), nuj.org.uk/about/nuj-code. Further details of the complaints process can be found on our website (below) or can be obtained by contacting the Editor by email: paul@southbristolvoice.co.uk or by post: 18 Lilymead Avenue, Bristol BS4 2BX or by phone: 07811 766072. southbristolvoice.co.uk/complaints-procedure All stories and pictures are ©South Bristol Voice (unless otherwise stated) and may not be reproduced without permission in this or any other plane of the multiverse. South Bristol Voice Ltd | Co. no. 09522608 | VAT no. 211 0801 76

That’s music to my ears!

That’s music to my ears!

Cinema plan wins supporters – but most aren’t from BS3 Cinema supporters writing to council are more than 2:1 from other parts of Bristol THE PEOPLE of Bedminster are debating whether they want or need a cinema after an operator was announced for a new picture house in the controversial St Catherine’s Place development. Scott Cinemas, which runs the Henleaze Orpheus in North Bristol, is encouraging its customers to write to planners in favour of the new scheme. “It’s fantastic to see these plans to regenerate this part of Bedminster – and I have no doubt our cinema will be vital in the area’s renaissance,” said Scott Cinemas director Dan Harris. “We jumped at the chance to be involved. Bedminster is probably the only area of Bristol where the majority of local residents need to travel into the city centre or much further afield to visit the cinema.” When the Voice posted the news on Facebook, some readers welcomed it. One said: “Scott Cinemas are great – we drive from BS3 to Henleaze to go to their cinema as it’s so reasonably priced. It will be great to be able to walk to see films locally!” Another said: “I’d love to have a cinema so close by.” Others queried the need for a new cinema, saying some

existing screens aren’t well used. “There’s lots of cinemas close by, we really do not need another one! Showcase, Showcase de Lux, Odeon, literally walking distance or a short drive,” said a reader. The £3 million new cinema would have Dolby Atmos sound and 4k laser projection in all three screens, and a bar-café. A post on Scott Cinemas’ website urges people to write to the council in support of the planning application by Firmstone to rebuild the tired St Catherine’s Place shopping centre with 271 flats. Scott doesn’t mention the 22-storey tower which would be built above the cinema. Since then, 36 people have written to support the plan – 10 of them from BS3 and 26 from other areas of Bristol. Representatives of Bedminster’s beleaguered traders are backing the cinema plan and the developers’ Framework. George Grace, manager of the

traders’ Town Team, said: “The developments around Bedminster Green are key to the future of East Street. We all know that many high streets have been impacted badly by the internet and other forces. If we are not careful these places, where communities meet and mix, will disappear entirely. “It’s time we looked forward, and one of the solutions is to provide more homes so shopper demand is within easy walking distance. If approved, the Bedminster Green Framework will help achieve this.” • A pilot study under the Love our High Street initiative has been given £25,000 to look at how to rejuvenate East Street, Bedminster Parade, Cannon Street and part of North Street. • Bedminster Green update: 6-7

n BRIEFLY Council threat to new gym n THE LUXE super-gym, which opened last year in the former Bedminster Library in St Peter’s Court, has not renovated the listed building in line with its planning permission, according to the council. Luxe is under threat of enforcement action. The gym’s owners dispute they have done anything wrong. n GET LITTER picking with members of Ashton Vale Together on Thursday March 7, meeting on the corner of Silbury Road and Ashton Drive at 10am. The group’s next meeting is on Tuesday March 12 at Ashton Vale Community Centre ,6.30-8pm. Details: 07840 680516. n THE PLAN for a homeless centre in Spring Street, reported in the last Voice, has won planning permission. Charity Help Bristol’s Homeless plans 15 temporary container homes.

HALIFAX SET TO CLOSE THE HALIFAX at 103 East Street is to close on May 23, the bank said, “in response to customers’ changing needs”. The number visiting the branch fell 16 per cent in a year, it said, though use of the Self Service zone rose seven per cent. The nearest Halifax will be in Broadmead. Banks remaining in BS3 are Nat West in North Street, HSBC in Cannon Street, and TSB Santander, and Barclays in East St.

Selling with integrity Here’s a little of what you can expect when you deal with Urban Lighthouse: - One point of contact throughout - Experience, the kind that comes with 30 years in the business - No kickbacks for referrals - A long-term local resident

If you would like to sell, want genuine value for money, and a refreshingly different approach, please get in touch.